The Nintendo Switch has been a runaway hit since its launch all the way back in 2017. Nintendo's hybrid console has been warmly received by gamers of every walk of life, but it has suffered in the one area that all other console makers have done well in: online services. We were excited to see that Nintendo was expanding its online offerings when it recently announced its Online + Expansion Pack, which launched yesterday. The Online + Expansion Pack option does come at a cost, $49.99/year to be exact, but that brings all the features we enjoyed from the base Online pass and access to the library of Nintendo 64 and SEGA Genesis games listed with the announcement. 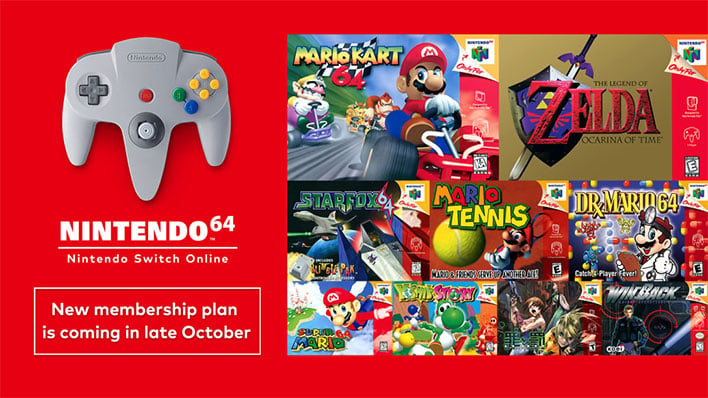 That all sounds absolutely wonderful for the service (albeit a pricey upgrade over the regular $19.99/year subscription), so imagine our surprise at the reception we've seen so far. It's only been a day since Nintendo released its Online + Expansion Pack and fans are less than pleased. They have taken to the forums of ResetEra to work on compiling a list of grievances they have with the current state of the N64 games.
So far the complaints seem to be isolated to the N64 ports of games. We're talking about issues from input lag, sound delays, missing textures, and frame rate issues. But what we find to be the most egregious is the issues with Controller Pack Errors and bizarre button layouts.

Remember the Controller Pack? Yeah, that thing you had to plug into the expansion port of the N64 controller in order to save game files.  So you can imagine the frustration that comes from it not working in this scenario. No saves, no good.
The other issue is with the bizarre button placement when using the Switch Controller. Sure, this can be remedied by purchasing the official N64 controller, but when you have the six face buttons of the N64 Controller (yellow directional buttons + A and B) and you try to put that on the 4 face buttons of the switch controller things get wonky. Honestly, we're not sure what the best course of action for this one is--maybe map the yellow direction buttons to the right analog stick directions or let the L and R act as the UP and LEFT while the X and Y buttons act as the RIGHT and DOWN.

We're in the early days of the Online + Expansion Pack being available so there's hope a lot of this can get worked out. It's just unfortunate that something that had people so excited for its launch has hit the streets with so many issues. It'll be interesting to keep track of the ongoing findings in the forum thread that has now grown to over 15 pages worth of discussion.