In just under three months from now, the upgraded Nintendo Switch OLED will release to retail for $349, and though some people have been disappointed that it is not a bigger hardware refresh, we have little doubt it will be one of the hottest tech items around when it arrives. Your best chance at grabbing one is to secure a preorder. If that is your plan, you might be able to place one as early as this week in the US.

Here's the thing—Nintendo so far has only said the Switch OLED will release on October 8, 2021, but did not say when preorders will actually go live. There were reports that some retailers in the UK had opened up preorders for the upcoming game console, but as of this writing, it does not seem that any of them are accepting orders. It's possible they went live in error, or sold out whatever initial preorder allotment they might have had.

When And Where Will The Nintendo Switch OLED Be Available To Preorder In The US?

In the US, retailers have not begun taking preorders, though a few sites have erected placeholder listings. And over at GameStop, the retailer says "Check back soon for preorders." How soon? Nobody seems to know, so I decided to ask Best Buy, with the full expectation I would get a canned response. To my surprise, the online support rep indicated that preorders will be available this week.
Here is the exchange (some responses have been edited out for length—nothing relevant to the topic, just pleasantries during the conversation)...

Me: Any chance you can tell me when preorders will open for the new Nintendo Switch OLED console? (SKU 6470923)

Best Buy: We are expecting inventory this week! Try to check inventory on Thursday, Tuesday and Friday between 10-11 Am and 3-4 Pm CT. They normally send it at those hours.

Me: Just to be clear, we're talking about SKU 6470923, right? The console doesn't release until October 8, 2021, but I understand there will preorders accepted ahead of time (and you're saying probably this week?)

Best Buy: Yes that is the one.

Online chat exchanges are not always the most reliable means of obtaining information, though. Furthermore, the initial response reads like it is part of a generic script for inquiries about out-of-stock items in general, hence my follow-up question. And even though the rep confirmed they were indeed talking about the Nintendo Switch OLED SKU specifically, I am still skeptical.
That said, this is the first indication I've seen of when preorders for the new console might go live. My skepticism aside, it is entirely possible that Best Buy (and perhaps other retailers) open up a first batch of preorders on the days indicated. We'll have to wait and see, but if you're hoping to secure one, it's worth marking your calendar.

Here's where to check preorder pages...

The Switch OLED could show up at other retail sites as well, but at least for the time being, your best bet is to focus on the ones that already have actual placeholder listings. And if going by the Best Buy rep's information, the days and times to check are Tuesday, Thursday, and Friday between 10-11am CT (11am-12pm ET) and 3-4pm CT (4-5pm ET).

Should I Buy The Nintendo Switch OLED? 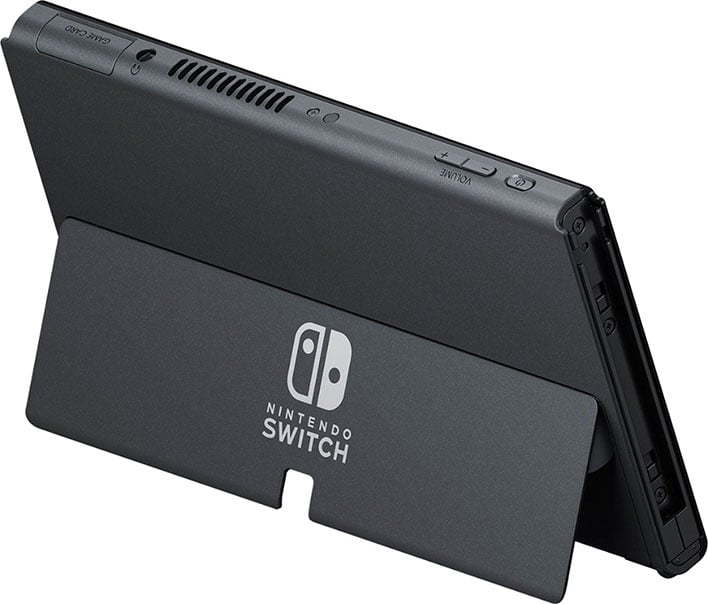 Whether or not you are interested in the Nintendo Switch OLED is another topic. It brings with it a bigger display than the current Switch console (7 inches versus 6.2 inches) and is getting upgraded to an OLED panel, so we can reasonably expect better image quality.
Beyond the display, Nintendo doubled the onboard storage from 32GB to 64GB, implemented a much wider (and better) kickstand, and added a white and black color option. Battery life is the same as the revised Switch with its IGZO panel (up to 9 hours). The OLED version is, however, slightly heavier at 0.71 pounds versus 0.66 pounds, and it costs more ($349 versus $299).
"The new Nintendo Switch (OLED model) is a great option for players who want to experience the new vibrant screen when playing in handheld and tabletop mode," said Nintendo of America President Doug Bowser. "With the addition of this new model to the Nintendo Switch family of systems, people have an additional choice of a system that best fits the gaming experience they desire—whether it's Nintendo Switch (OLED model), Nintendo Switch or Nintendo Switch Lite."
An OLED screen on the Nintendo Switch is an enticing proposition, as is the added storage. Unfortunately, Nintendo did not refresh the core components to support faster and/or higher resolution gameplay—it's still based on the same NVIDIA Tegra X1 SoC with 4GB of LPDDR4 RAM. So this is not what people hoped would be the Switch Pro to enable 4K gaming. Womp, womp.

For that reason, Nintendo's JC Rodrigo was upfront on Twitter when asked if the Switch OLED runs any better than the current Switch. To the point, he said if the OLED screen does not entice you, Switch owners should stay with the model they already own. That also means you can save yourself $50 by opting for the IGZO variant, if you don't care about the OLED and storage upgrades.
Do you plan on buying the Switch OLED when it becomes available? Let us know your thoughts in the comments section below.