We're now into the second week of November, and Black Friday looms just around a couple of corners. As always, retailers, vendors, and manufacturers are looking to get a jump on the annual season of deals. For Nintendo, that means announcing some enticing discounts, including an upcoming Switch console bundle and a bunch of games that will be on sale in a couple of weeks.
The headliner is a Nintendo Switch bundle that comes with a free download for Mario Kart Deluxe 8 and a three-month individual membership to Switch Online, for just the cost of the console itself ($299.99). That's a $59.99 game and a $7.99 membership package at no added cost.
Note that this is the regular version of the Switch console, not the more recent Switch OLED model that retails for $349.99 (and comes with twice the baked in storage). From the packaging artwork, it appears this will be the SKU with Neon Blue and Red Joy-Con controllers. The deal will be available on November 21, 2021. 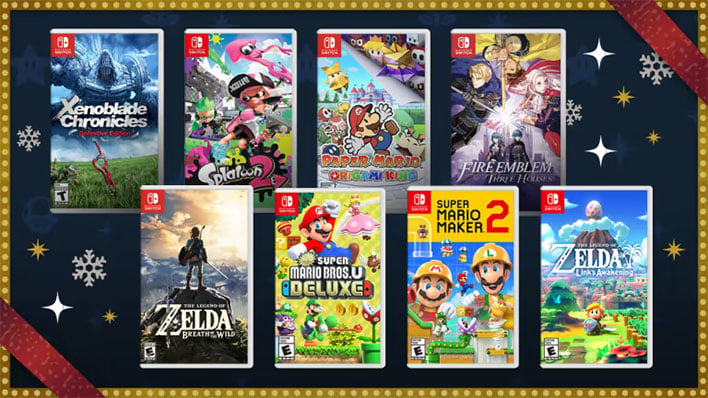 Meanwhile, Nintendo also revealed that a wide selection of Switch games will be on sale for $39.99 on the same day, each one down from their $59.99 MSRP. Here's the list of games Nintendo shared today...
In addition, says Mario Kart Live: Home Circuit will be available for $59.99 (save $40), and Ring Fit Adventure for $54.99 (save $25), both starting on November 21 as well.
"With families looking for new ways to connect and spend time together this year, Nintendo Switch offers a wide variety of experiences for every member of the family," said Doug Bowser, President of Nintendo of America. "Whether you are shopping for an active gamer or someone new to the world of Nintendo, this year’s Black Friday deals have you covered."
The unfortunate caveat is availability of the Switch console itself, with or without the bundle offer. Regarding the Switch, Nintendo president Suntaro Furukawa recently offered up a blunt assessment of availability. "We can't product enough to meet the demand we are expecting during the upcoming holiday season. Currently there is no sign of improvement and the situation continues to be severe so I can't say how long it will continue."
Nintendo also downward-revised its Switch console sales forecast to 24 million units for its full fiscal year, which amounts to producing 1.5 million fewer systems than it previously planned. As always, we'll keep an eye on the retail situation and, when we can, alert you to upcoming restocks.
Outside of Nintendo's upcoming Black Friday discounts, there are some new Switch games on tap. Pokemon Brilliant Diamond and Pokemon Shining Pearl both launch on November 19, followed by Big Brain Academy: Brain vs. Brain coming out on December 3. Then sometime next year, Nintendo will release Kirby and the Forgotten Land, Splatoon 3, and the sequel to The Legend of Zelda: Breath of the Wild.