A rare Nintendo PlayStation prototype is up for sale, and the bids are flying in at a furious pace. Wait, a Nintendo PlayStation… what the heck is that? Decades ago, Nintendo tasked Sony with developing a CD-ROM add-on for the wildly popular SNES game console. The resultant frankensystem combined the hardware of the SNES with an integrated CD-ROM drive.

While around 200 prototypes were built, most of them were destroyed. However, a few managed to survive the scrap heap; one of which is currently up for auction. This is the same system that Benjamin Heckendorn (aka Ben Heck) nursed back to health in 2017. The console was designed to play both standard SNES cartridge-based and CD-ROM games. However, that latter capability was never finished due to licensing issues, hence why the project was abandoned.

The auction for the Nintendo PlayStation is currently up to a staggering $33,000 and there are 22 days remaining to get your bid in. The listing adds quite a bit of background on the console, including this nugget of information:

The prototype does share some exterior similarities with both the Super Nintendo and the Sony PlayStation, but it has its own, unique characteristics as well. It has not only a slot for Super Famicom and Super Nintendo games, but a CD-ROM drive that was meant to play disc-based media and presumably video games as well. Though the CD-ROM drive was not currently working when it was found in 2009, it has since been repaired by Benjamin Heckendorn, a YouTube personality known for his console repair videos. It now has the ability to play music CDs like the commercially produced PlayStation, but there is no proprietary software that's known to have been made during the prototype's development.

According to the listing, the console was originally owned by Olaf Olafsson, who served as the first CEO of Sony Computer Entertainment Inc. After he left Sony in 1998, he went on to Advanta Corporation and took the Nintendo PlayStation along with him. However, when Advanta filed for bankruptcy in 2009, it was discovered that Olafsson had left the console behind after he jumped ship to Time Warner. 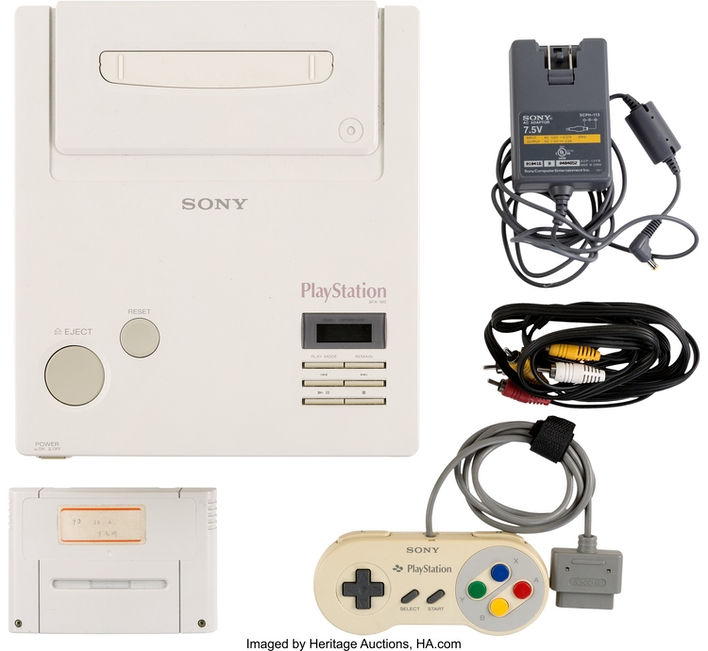 “Advanta filed for bankruptcy and began gathering up everything in their corporate office to sell at auction,” the listing explains. “As the story goes, the Nintendo Play Station prototype was grouped together with some miscellaneous items that was boxed up with a group lot, the contents of which were veiled. A nice Easter egg for the winning bidder, indeed!”

When this article was first being written, the auction was $31,000; now it is up to $33,000. We have the feeling that this figure will skyrocket over the next three weeks. As it currently stands, it’s a bit too rich for our blood, but may be some of our readers have the deep pockets to bid on this one-of-a-kind piece of gaming history. You can place your bid here at Heritage Auctions.