Amazon’s New World may already be one of the most popular games of the year, but many players are struggling to actually play the game. Queue times have been prohibitively long. Thankfully, Amazon has put forward a solution. Amazon will be adding several worlds to their New World servers to cut down on wait times.

New World players complained yesterday that they were being told they would need to wait days to play the game. Other players were unable to join the queue and players who experienced bugs were often forced to restart and rejoin the long queue. The issue initially impacted primarily players in the European Union, but began to affect players worldwide as each server went online. 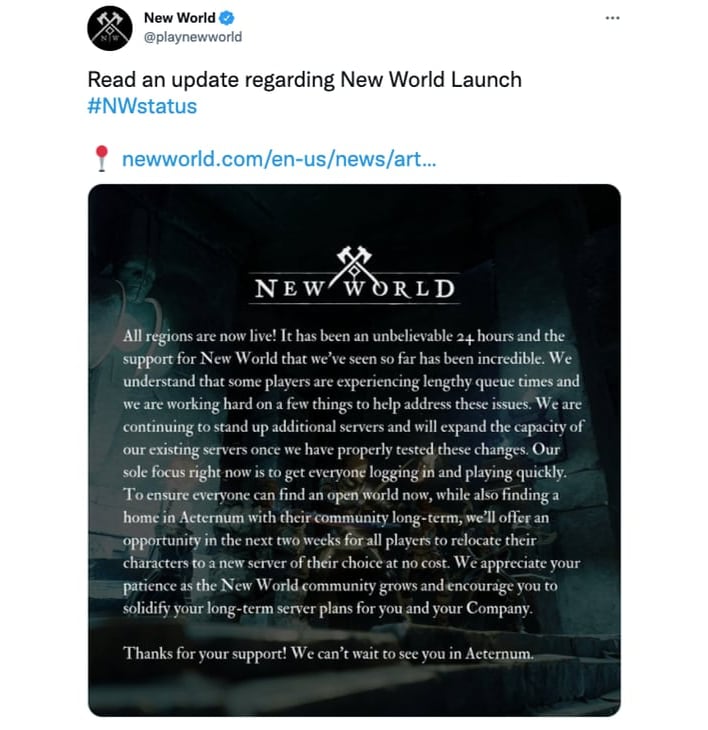 Amazon recently stated that they are “continuing to stand up additional servers and will expand the capacity of the existing servers once we have properly tested these changes.” They argued that their main purpose right now is to get everyone online and playing within a reasonable amount of time. They further remarked that players will be able to relocate their characters to a new server free of charge within the next few weeks. This will be a good opportunity for players as they cannot currently change worlds once they have created a character and you can only have one character per world. There is no set date for when this change will happen.

New World has otherwise proven to be a commercial success. It is already Steam’s most played game of 2021 and is set to become one of the most popular games available on Steam ever. There were over 700,000 concurrent players at one point and over 925,000 players over the last 24 hours. This was the largest game debut since the release of Cyberpunk 2077 in which there were over 1.05 million players at its peak. New World’s concurrent player count is only otherwise beaten by PlayerUnknown’s Battlegrounds, DOTA 2, and Counter-Strike Global Offensive. This all happened despite the major issues with the queues. The concurrent player count likely would have been higher should all who had wanted to jump in on the game been able to.