It's no secret that Microsoft ramped up its baseline hardware requirements for Windows 11 compared to Windows 10. However, a large swath of the PC population is being left out by requiring AMD Ryzen 2000 and 8th generation Intel Core (and newer) processors and mandatory TPM 2.0 support.

These steep requirements are readily apparent in the enterprise market, as a new survey by Lansweeper shows that over half of workstations in operation today are ineligible for the free upgrade to Windows 11. This data is based on an estimated 30 million Windows devices used across 60,000 organizations. For those that need a refresher, here's what Microsoft lists for Windows 11's minimum system requirements:

According to the hardware survey, only 44.4 percent of the processors used in current workstations meet Microsoft's minimum system requirements for Windows 11. Regarding TPM 2.0, 52.55 percent of systems support it, but just over 29 percent failed the test, while 19 percent weren't compatible (or did not have the feature enabled in BIOS). Not surprisingly, the one spec that the overwhelming majority of systems met was the relatively low 4GB RAM requirement. 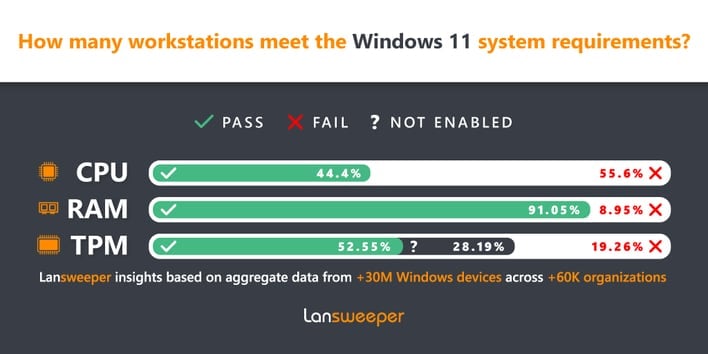 When it comes to virtual machines, the prospects were even more dire for businesses. "Only 0.23% of all virtual workstations have TPM 2.0 enabled," writes Lansweeper's Esben Dochy. "This isn't completely a surprise, TPM has never been required for Windows and while TPM passthrough (vTPM) exists in order to give virtual machines a TPM, it is rarely used. Meaning that most VM workstations will need to be modified to get a vTPM before they can upgrade to Windows 11." 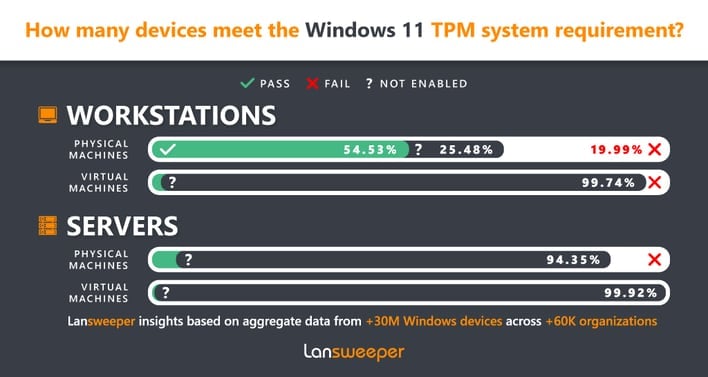 We should mention that Microsoft will allow customers with unsupported systems to move to Windows 11 if they perform a clean install. This is probably not an ideal solution for most businesses out there, but that's not the only roadblock. Microsoft won't guarantee that unsupported PCs will receive future Windows 11 quality of life and security updates, which should be an absolute non-starter for businesses. The company recently started displaying a prompt that absolves itself of any responsibility for potential harm done to unsupported systems that take the plunge with Windows 11.