Smartphone OEMs are gearing up for the next round of flagship smartphones that will be based around Qualcomm's upcoming Snapdragon 875 SoC. OnePlus is normally among the first to announce new designs based on Qualcomm's newest flagship chips, and that tradition is expected to continue with the OnePlus 9 Pro.

First and foremost, we can see that the OnePlus 9 Pro features a 6.7-inch curved 120Hz QHD+ display. There are slim bezels at the top and bottom of the smartphone along with a hole punch cutout for the selfie camera in the top left-hand corner of the display. The familiar OnePlus alert slider and power button are located on the left side of the chassis, while the back is predictably made of glass to support wireless Warp Charging according to OnLeaks.

Also on the back is a decent-sized rectangular pod that houses a total of four cameras. At this time, there are no details on specs for the cameras, but we'd expect the typical yearly camera hardware upgrades that are afforded to flagship smartphones. OnePlus has usually been a step or two behind the likes of Samsung, Google, and Apple with respect to camera performance, so here's to hoping that the company can tweak its software to make it more competitive with its fierce rivals. 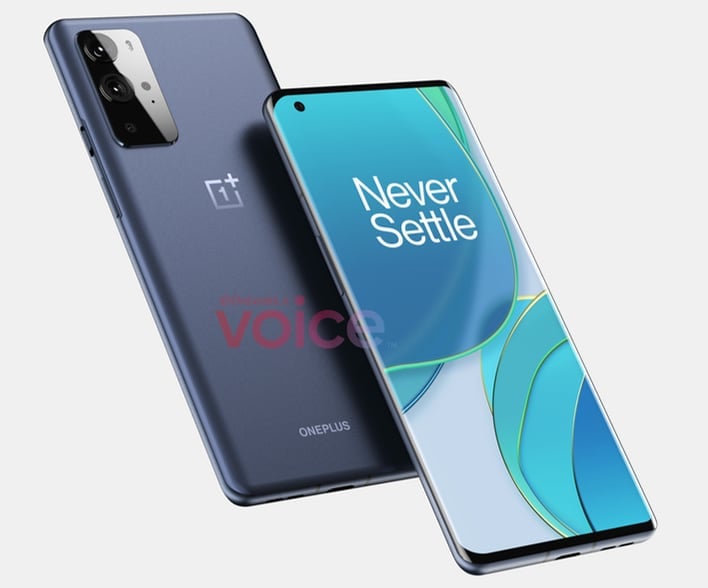 The OnePlus 9 Pro will be joined by the OnePlus 9, which will also feature a Snapdragon 875 SoC (paired with 8GB RAM). However, the OnePlus 9 is expected to retain a 6.55-inch flat display with a 120Hz refresh rate. We also know more with respect to what specs the OnePlus 9 will have, with previous rumors pointing to triple rear cameras (64MP, 16MP, 8MP), 32MP selfie camera, 5000 mAh battery and 65W Warp Charge capabilities.

Both the OnePlus 9 Pro and the OnePlus 9 are expected to launch in March and will be going toe-to-toe with Samsung's Galaxy S21 family.