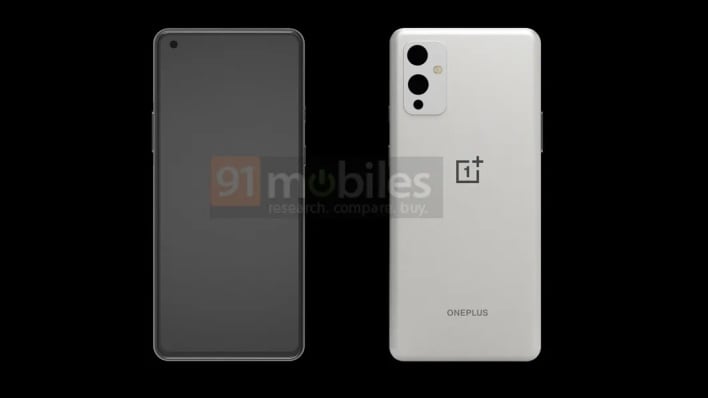 Even though OnePlus is still trying to drive its latest OnePlus 8T forward with giveaways, it appears details on the next flagship device have leaked out. The OnePlus 9 is the firm's upcoming device expected to arrive sometime early next year. According to the leak, the phone will ship with some updated specs with a familiar design and will come in two different models, as is standard for OnePlus. Let’s take a look at what OnePlus could have to offer as next year’s flagship phone.

Over the weekend, 91mobiles got its hands on alleged CAD renders of the OnePlus 9 from an unnamed leaker. At the front of the device is a familiar hole-punch camera situated in the upper-left corner akin to the OnePlus 8T. Around the back is a matte color scheme with three vertical cameras and a single flash. It would not appear there is much of a size reduction in the camera area, so it could feel the same as the OnePlus 8T.

While these renders show design, the leaker also passed along some alleged specs of the device. The leaker mentioned that the OnePlus 9 would have a larger flat display at 6.55 inches. The source also confirmed that this display would be a 120Hz panel, which is becoming the new standard for Android flagships. According to 91mobiles, the phone could ship with the upcoming Snapdragon 875 and 8GB of RAM. The rear camera is predicted to be a 64MP primary shooter with 16MP and 8MP cameras below it. Around the front, a 32MP selfie camera is expected, and driving the whole shebang is a 5000mAh battery with 65W charging that OnePlus launched with the OnePlus 8T

Overall, it looks like there will not be anything too spectacular with the OnePlus 9. The Snapdragon 875 is the most exciting thing to look forward to, and it should be announced in December. Other than that, it is a mild incremental bump from the OnePlus 8T to the OnePlus 9, but things could change between now and its actual release.