Since COVID-19 has halted events around the world, Google has had to become creative with the way they are launching new products. On Wednesday, September 30th, Google will be hosting “Launch Night In” to showcase “a new Chromecast, the latest smart speaker, and new Pixel Phones.”

Earlier this month, a leak from Vodafone confirmed that both the Pixel 5 and Pixel 4a (5G) would launch at the end of September, so an announcement like Google’s comes as no surprise. In the coming days, we should expect Google to hand out more details to the public on this event, but for now, the big topic is the upcoming Pixel 5 and Pixel 4a (5G) which are expected to be announced. 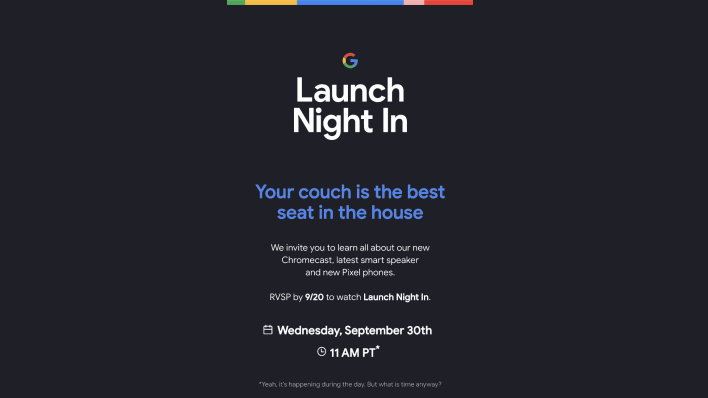 Both the Pixel 5 and Pixel 4a (5G) will be Google’s first 5G devices. The Pixel 5 is rumored to have a Snapdragon 765G, 8GB of RAM, 6” FHD+ OLED Display, and a 4000mAh battery making this a pretty punchy device (though not as much as devices with a Snapdragon 865). The Pixel 4a (5G) is reportedly taking a step down from the 5 wherein it will only have 6GB of RAM, and a 3800mAh battery. The screen, however, may be slightly larger at 6.2”. No matter what, it will not be long until we get to see these devices in person.

Alongside the stars of the show, the new Chromecast device and smart speaker will take the stage too. Both devices have had rumors floating around, so though not a surprise, it will still be worth it to see. When the event goes live to the public, we will be covering all the announcements made, so stay tuned for updates on "Launch Night In."