One of the potentially devastating side effects of strokes is the loss of ability to speak. Researchers for the most part have adopted “spelling-based” systems that allow patients to type out their words one letter at a time. However, researchers have recently discovered other ways for patients to more quickly communicate. Neuroprosthesis allows researchers to translate signals that are supposed to control the muscles of the vocal system into actual words.

The study was led by researchers at the University of California, San Francisco and its results were recently published in the July 2021 edition of the New England Journal of Medicine. The participant in the study was one who had suffered from a stroke over fifteen years ago and had lost the ability to speak. The participant, referred to primarily as “BRAVO1,” helped produce a list of fifty vocabulary words that were related to their everyday life. The researchers then “implanted a high-density electrode array over BRAVO1’s speech motor cortex.” BRAVO1 was asked over the course of several months to trying to prounounce the words from the aforementioned vocabulary list “while the electrodes recorded brain signals from his speech cortex.” 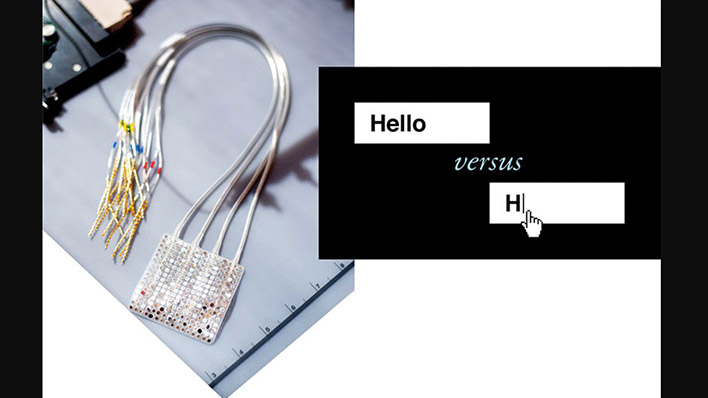 Image courtesy of the University of California, San Francisco


The researchers utilized a custom neural network model to distinguish patterns in BRAVO1’s brain activity. This was done so that they could figure out when BRAVO1 was trying to speak and what words they were attempting to pronounce. The decoded words would then appear on a screen. One of the questions they asked BRAVO1 was “How are you today?” to which the participant responded “I am very good.” The researchers were able to “decode words from brain activity at a rate of up to 18 words per minute with up to 93 percent accuracy.” The system also included a kind of “auto-correct” function to help more thoroughly interpret the words.

Future studies will need to include more participants to truly determine whether this approach is a viable option. However, the study gives hope to many. Thousands of people lose the ability to speak each year due to a variety of reasons ranging from strokes to accidents.