Netflix Makes A Major Viewer Rating System Update, Do You Give It Two Thumbs Up?

Netflix is giving viewers another way to express how they feel about the content they watch on the streaming platform. They want to know if you just like a show, or really love it.

The streaming platform announced today that one of its most popular shows, Stranger Things, will be returning on May 27th for its fourth season. But Netflix does not simply want to know if you like the show, they want to know if you love it as well. That's why Netflix announced yesterday that it was adding a new feature to go alongside its Thumbs Up and Thumbs Down grading system.

Currently, you only have two options for expressing how you feel about content you view on Netflix, Thumbs Up or Thumbs Down. But moving forward, you will also have the option to give a Double Thumbs Up to content you really, really enjoy. The option was added yesterday and can be found to the right of the single Thumbs Up option on the TV, Web, Android, and iOS mobile devices. There's no Double Thumbs Down button, though (drats!).

When you choose a thumbs up or down, it is used to let Netflix know what type of content you are enjoying, and to better personalize your profile. By adding the Double Thumbs Up feature, it hopes to streamline your suggested content even more. Per its blog, "Providing an additional way to tell us when you're really into something means a profile with recommendations that better reflect what you enjoy." 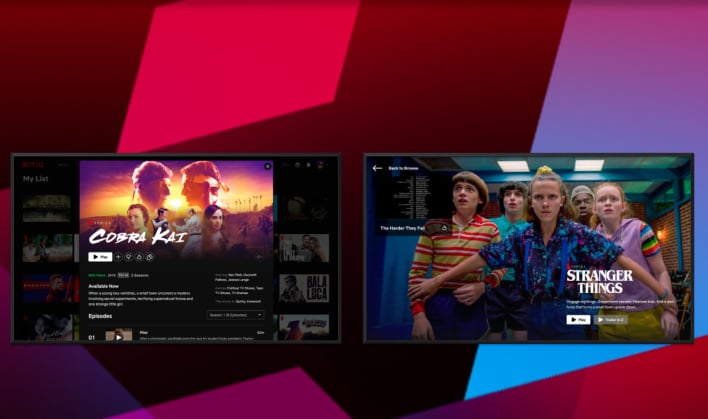 The company has been working on the feature for about a year and a half, according to Christine Doig-Cardet, who leads the company's personalized UI product innovation team. "We were hearing from members that 'like' and 'dislike' was not sufficient," she stated. "There were some shows that they really, really, really enjoyed. Differentiating between what they love and what they like was important."

Deciding on what symbol to use for conveying this love for a show came down to a heart and the two thumbs up. While the heart symbol seemed to be the obvious choice, the Double Thumbs Up option fell right in with the existing iconography.

"We had a lot of interviews and surveys, (and) the heart was not really resonating," Doig-Cardet stated. "The idea that came from members was: Why don't you just try two thumbs up?"

So, while a singular thumbs up allows Netflix to know that you enjoyed a show, giving it a Double Thumbs Up makes it clear that you really loved it.