NASA shared an image of one of the most extreme rotating neutron stars, or pulsars, ever captured, and leaves many in awe. The image was captured in three bands of X-ray light detected by the Chandra X-ray Observatory in 2016.

Social media has been lit up lately with amazing and jaw dropping imagery from the James Webb Space Telescope and Hubble Space Telescope. We often forget that there are been many awe-inspiring images that have been captured within the last decade from other deep space observatories, such as the one shared by NASA recently on its Instagram account. 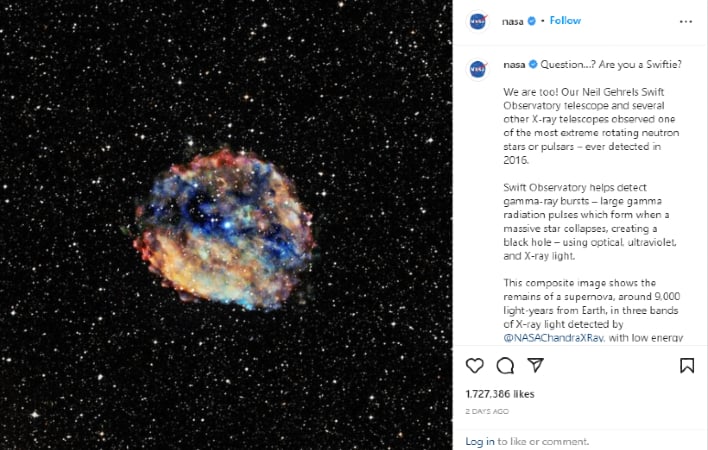 In the image shared by NASA on its Instagram account, the lowest energy X-rays from Chandra are red, the medium band is green, and the highest energy X-rays are blue. According to NASA, the bright blue X-ray source in the middle is 1E 1613.

Astronomers had known for decades that there were remains of a supernova explosion 9,000 light years from Earth, along with its central source, known as 1E 161348-5055 (1E 1613 for short). Then in 2016, an instrument aboard NASA's Swift telescope captured the release of a short burst of X-rays from 1E 1613. The "intense, extremely rapid fluctuations on a time scale of milliseconds, similar to other known magnetars," captured the attention of astronomers.

This led a team of astronomers to utilize NASA's Chandra X-ray Observatory and Nuclear Spectroscopic Telescope Array, or NuSTAR, to further investigate. With the new data, along with archival data from other observatories, it was confirmed that 1E 1613 has the properties of a magnetar, making it the 30th known. Another group of astronomers were able to determine that the magnetar also has a very slow spin period.

If you would like to learn more about the evidence and nature of 1E 1613, you can read the findings of the research on arxiv.org.