Less than a week after the first images from the James Webb Space Telescope were released, a group of scientists have revealed that the telescope may have located a galaxy that existed 13.5 billion years ago. The galaxy could date back to just 300 million years after the Big Bang (just a baby, in cosmic terms), placing it about 100 million years earlier than any other galaxy previously on record.

JWST is already providing imagery that leaves its audience in complete awe. One of the latest images showed a spiral galaxy that was leaving some with thoughts of a Dr. Who vortex. Now the deep space observatory has possibly located the oldest galaxy that scientists and astronomers here on Earth have ever seen.

"We're possibly looking at the most distant starlight that anyone has ever seen," remarked Rohan Naidu of the Harvard Center for Astrophysics in a recent interview. Naidu is part of the Harvard and Smithsonian Center of Astrophysics team who published a duo of preprints on Wednesday. As of now, the paper has yet to be peer-reviewed, but is causing a lot of chatter among those in the field.

The image was shared on Twitter by Dr. James O'Donoghue, stating, "JWST has potentially smashed records, spotting a galaxy which existed when the universe was a mere 300 million years old!" 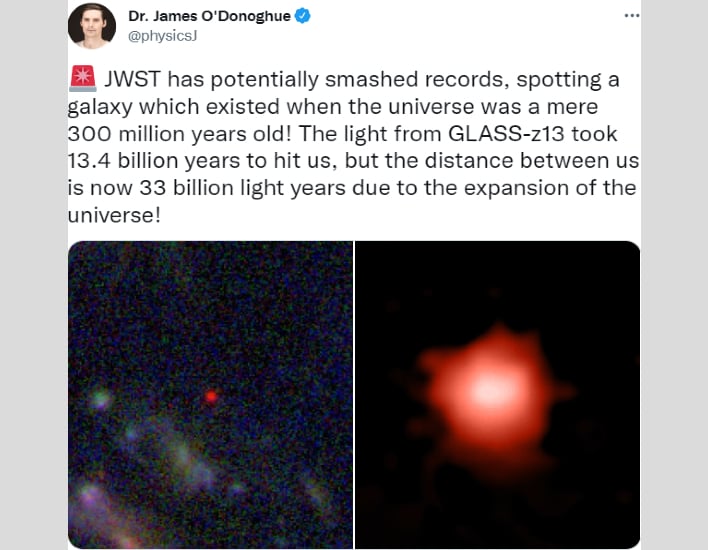 The galaxy, known as GLASS-z13, is thought to have existed in the earliest beginnings of the universe. It was located using "early release" data from JWST and its main infrared imager, called NIRcam. The Near Infrared Camera (NIRcam) is the observatory's primary imager, and covers the infrared wavelength range from 0.6 microns to 5 microns. Its objective is to detect light from the earliest stars and galaxies in the process of formation, the population of stars in nearby galaxies, as well as young stars in the Milky Way and Kuiper Belt, according to NASA.

Thomas Zurbuchen, NASA's chief scientist, tweeted in response to the finding, "Astronomy records are crumbling already, and more are shaky." He added, "Yes, I tend to only cheer once science results clear peer review. But, this looks very promising."

Naidu told New Scientist that it in fact found two compelling candidates for extremely distant galaxies. He stated, "If these galaxies are at the distance we think they are, the universe is only a few hundred million years old at that point." He also said, "We searched all the early data for galaxies with this very striking signature, and these were the two systems that had by far the most compelling signature."

There is most assuredly more work to be done in order to verify the findings concerning the two new galaxies, but the possibility it presents shows just how powerful JWST is. As the space telescope continues to scour the vast depths of the universe for more discoveries for scientists and astronomers to uncover, we are all on the edge of our seats waiting to find out what it might reveal next.