The James Webb Space Telescope has not been sitting idly in space since the first images were revealed by NASA. The space telescope has been busy capturing images of deep space, and an intriguing image of a spiral galaxy was shared by an astronomer on Twitter that has left some with thoughts of a Dr. Who vortex.

The first image from JWST was shared during a live event featuring President Biden, a day ahead of the official event where the rest of the images were released. The five images that were revealed did not disappoint, and sent social media abuzz with wonder and amazement at how much detail the space telescope was able to deliver. Since then, JWST has continued capturing images of the universe. Astronomers have been able to access some of those images, and one has made its way onto social media. 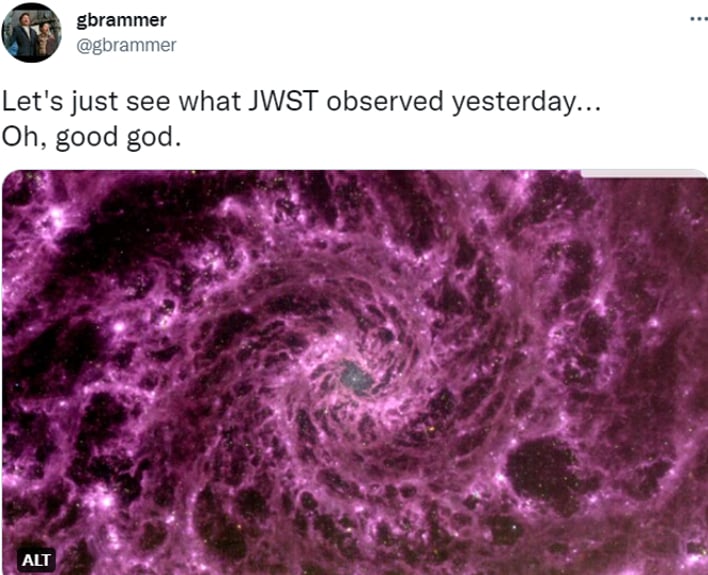 Dr. Gabriel Brammer, an astronomer at the University of Copenhagen in Denmark, shared the image of NGC 628 on his Twitter feed Monday. The image of the spiral galaxy was taken on July 17th and was transmitted back to Earth, where it was logged into the Barbara Mikulski Archive for Space Telescopes (MAST), where the data is readily available to anyone.

The image is a composite of three sets of data at different wavelengths taken by JWST's mid-infrared instrument team. Dr. Brammer then downloaded and translated each of the infrared wavelengths to red, green, and blue before combining them together in order to produce one image, which is what he shared on his Twitter account.

"This is a galaxy that probably looks a lot like what we think our own Milky Way looks like," remarked Brammer in an interview with The Independent.

NGC 628 has been captured before by Hubble, but in visible light. "You look at this galaxy with Hubble or with ground based telescopes you see blue stars, you see red stars, you see spiral arms, you see dust lanes," Dr. Brammer explained.

What JWST reveals is the gas and dust in the galaxy, rather than the stars. "If our eyes could see in these mid-infrared wavelengths, the night sky would look a lot more like this picture, which I think would be spectacular, maybe a little terrifying," Brammer remarked.

What does the image shared by Dr. Brammer make you think of? Do you think you would be terrified if you could see the night sky as JWST sees deep space? Or would you simply be lost in the wonder and amazement of it all? Let us know what you think in the comments.