NASA's Parker Solar Probe Zips Past Venus And Is On Pace To Set Speed Record At 364,621 MPH

The Parker Solar Probe is set to break its own impressive distance and speed records as it zips its way past the Sun. In its tenth of 24 planned trips around the Sun, the probe will again become the fastest human-made spacecraft to date.

NASA's Parker Solo Probe completed its swing past Venus on October 16th. It used the planet's gravity to frame its path for its approach to the Sun. This is the probe's fifth of seven planned passes of Venus in order to gain gravity assists. The flyby actually reduced the speed of the probe by about 6,040 mph (9,720 kmph) as it set it up for its tenth close pass by the Sun, which NASA says will be on November 21st.


As the probe zooms past the Sun it will be collecting data that measures the properties of the solar wind near its source. Nour Raouafi, Parker Solar Probe project scientist at the Johns Hopkins Applied Physics Laboratory (APL) stated, "We're observing higher than expected amounts of dust near the Sun. What's exciting about this is it's greatly improving our understanding of the innermost regions of our heliosphere, giving us insights into an environment that, until now, was a total mystery." 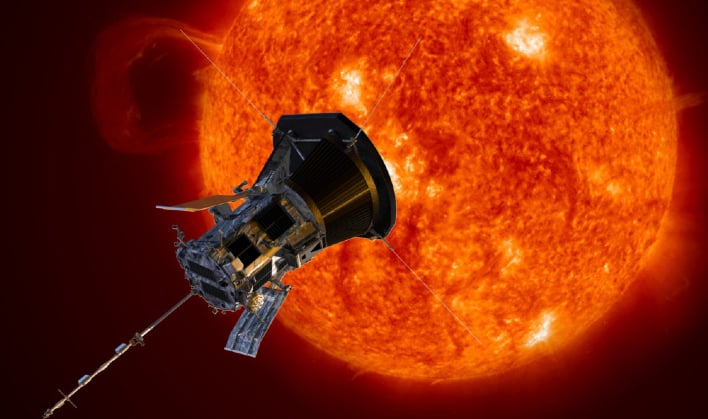 The Parker Solo Probe team did take into consideration the hazards that it may face during its time in space and traveling so fast and close the Sun's surface. "We designed materials and components that survive hypervelocity dust impacts and the effects of the even smaller particles created in these impacts. We modeled the makeup and effects of the dust environment, tested how materials react to the dust particles, and installed fault-tolerant onboard systems that are keeping Parker Solo Probe safe in this unexplored region," explained Jim Kinnison, Parker Solo Probe mission systems engineer at APL.

As grains of dust hit the spacecraft as it travels through space, the high-velocity impacts create clouds of plasma that produce electrical charges. These are detected by several sensors on the probe's FIELDS instrument that also measures the electrical and magnetic fields near the Sun. Scientist then use all that data to construct detailed pictures of the structure and behavior of the large cloud of dust that is found through the innermost solar system.

Along with the FIELDS sensors there is the WISPR imaging camera. Using data collected by each, scientist plan to investigate near-Sun dust in a region where no other mission has operated before. WISPR captures dust particles far away from the spacecraft, as well as reflected light from dust and shattering particles that can momentarily disturb its ability to see stars, which it uses for navigation. But team members are not worried that this will hinder the safety or instrumentation of the spacecraft operations. The probe also uses an inertial measurement unit and solar-limb sensors to keep the Thermal Protection System, or heat shield, pointed toward the Sun.

The Parker Solo Probe is set to break its most recent records on its next journey by the Sun in August of 2023 and November 2024. During those times it is expected to come within 4 million miles of the Sun's surface and reach a blazing fast speed of 430,000 mph. Here's hoping there are not interstellar speed traps along the way.