NASA's Juno probe has been beaming back some very interesting pictures as of late. The pictures have been giving scientists more insight into the atmosphere of Jupiter as well as the planet's Great Red Spot.

Before NASA begins its Artemis program early next year, it is going through all the new data that is being sent back to them from the space probe Juno. Juno first entered the orbit of Jupiter back in 2016. It has utilized a specialized suite of instruments in its 37 passes to send data from scans below the planet's cloud deck to scientists back here on Earth. Some of that data has surprised even NASA.

Scott Bolton, principal investigator of Juno from the Southwest Research Institute in San Antonio, stated, "Previously, Juno surprised us with hints that phenomena in Jupiter's atmosphere went deeper than expected. Now, we're starting to put all these individual pieces together and getting our first real understanding of how Jupiter's beautiful and violent atmosphere works - in 3D."


One of the specialized tools aboard Juno is a microwave radiometer (MWR). The MWR allows scientists to go beneath the cloud tops of the planet and delve into the various vortex storms. The most well known of these is the Great Red Spot, which is an anticyclone that was discovered nearly two centuries ago. The behemoth swirling storm is actually wider than our own Earth 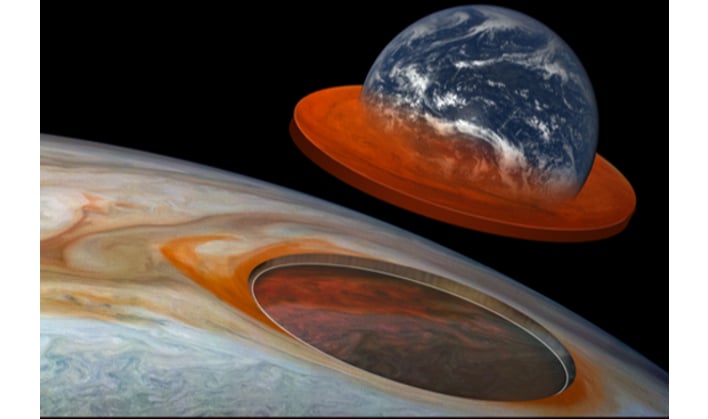 The new data indicates that the cyclones are warmer on top, with lower atmospheric densities, while being colder on the bottom, with higher densities. Anticyclones, such as the Great Red Spot, are colder at the top and warmer at the bottom, as the name would suggest.

Another surprising find is that these storms are actually taller than once thought. Some extend 60 miles (100 kilometers) below the cloud tops. The Great Red Spot actually extends over 200 miles or 350 kilometers. What makes this so surprising is that the height suggests that the vortices extend beyond where water condenses and clouds form. This is also below the depth where sunlight warms the atmosphere.

The mere size of the Great Red Spot lends itself to allowing NASA to use instruments aboard Juno to detect Jupiter's gravity field due to the concentration of atmospheric mass within the storm. During a low pass of Jupiter's cloud deck, scientists were able to measure velocity changes as small as 0.01 millimeter per second. This data was then used to measure the depth of the Great Red Spot to nearly 300 miles below the cloud tops.

Marzia Parisi, a Juno scientist from NASA's Jet Propulsion Laboratory said, "Being able to complement MWR's finding on the depth gives us great confidence that future gravity experiments at Jupiter will yield equally intriguing results."
In other Juno news, images of the north pole of Jupiter's moon Europa were seen for the first time recently. The icy moon may actually have livable conditions in its oceans due to water vapor apparently arising from plumes. Closer images are expected next year as Juno continues its voyage through space.

There has been a lot of hype as of late surrounding space travel and exploration as NASA and other commercial space companies go further into the great unknown. While the expected Halloween launch of the commercial SpaceX rocket was delayed due to weather conditions, people seem to be more enamored than ever with what is beyond what we currently know of space and what inhabits it.