NASA's Ingenuity helicopter's navigation camera captured the spacecraft picking up a small piece of foreign object debris (FOD) on one of its landing legs. Moments later, the debris could be seen drifting away.

The foreign debris on the landing leg of the helicopter is not the first that has been spotted on the red planet. Previously the Mars Perseverance rover team found an unexpected piece of trash, which is thought to have been a piece of the thermal blanket from the rocket-powered jet pack that lowered the rover onto the planet's surface. Ingenuity is no stranger to seeing debris either, as it spotted the remains of the parachute and cone-backshell from Perseverance's landing as well.


Since landing on the red planet, the Mars Ingenuity helicopter, which weighs less than 4 pounds, has flown a total of 7,392 meters (24,253 feet). The rotorcraft was designed to fly up to 90 seconds, at a height of around 10 to 15 feet off the ground. It is also capable of flying on its own, with minimal commands sent to the spacecraft from Earth in advance.

The most recent flight for Ingenuity was expected to travel an elevation of 365 feet (111.238 meters), and at an approximate speed of 10.6 mph (4.75 m/s). The flight was scheduled to only last 55.61 seconds. The purpose of the flight was to reposition the helicopter, according to NASA. 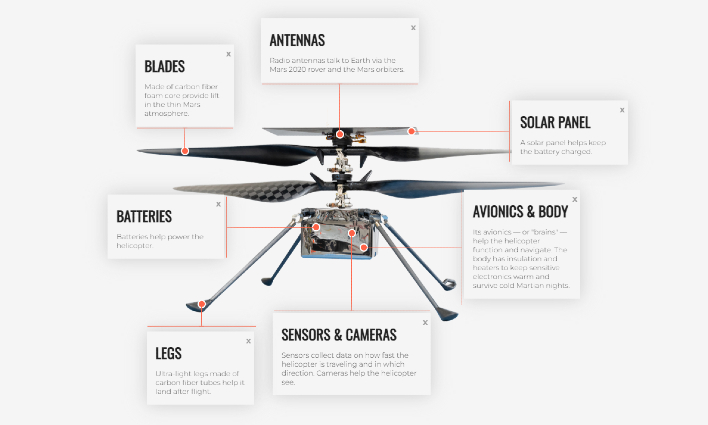 As of right now, NASA has not said what it believes the most current debris sighting might be. The footage was captured by the navigation camera of the rotorcraft during its 33rd flight on Mars, on September 24, 2022.