NASA recently launched its Double Asteroid Redirection Test (DART), the first mission to demonstrate asteroid deflection using a kinetic impactor. Teams at NASA's Goddard Space Flight Center are keeping a constant eye on DART, and NASA has even provided "Eyes on Asteroids" that gives everyone the ability to do the same.

The visions of Earth being impacted by a large asteroid, bringing about the annihilation of all humankind, has been in the back of people's minds since scientists theorized that an asteroid is what brought about the extinction of dinosaurs. NASA has taken the task of trying to develop a method of avoiding such destruction with its current DART mission, by deflecting any such danger away from our planet. As teams from NASA keep track of DART, everyone can follow along as it makes its way to a collision with fate.

NASA has provided everyone with a 3D real-time web-based application that allows you to keep track of DART as it makes its way toward asteroid Dimorphos, as well as being able to keep track of all known asteroids and other spacecraft. The "Eyes on Asteroids" application lets users click on any of the objects to pull up a close-up view and provides some information about each one. You can even fast-forward to September 26, 2022 when DART is scheduled to make its historic impact. 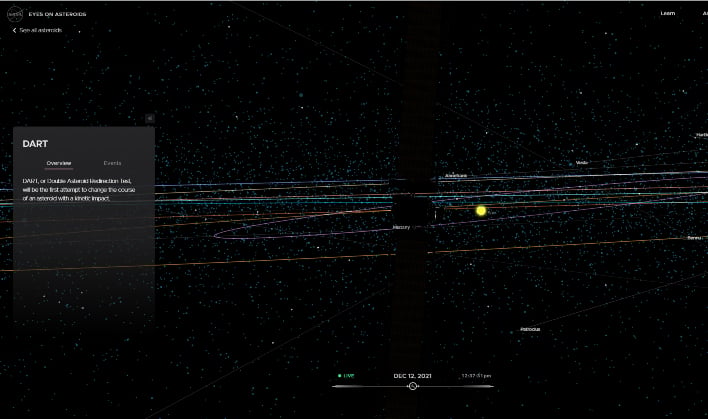 NASA is aware that the likelihood of an asteroid colliding with Earth any time soon is small. But they also realize that even one around 500 feet (150 meters) across could cause widespread damage to our planet. Therefore, it has taken the initiative to test out a possible doomsday deterrent by utilizing a kinetic impactor, hence DART. The kinetic impactor, a high-velocity spacecraft, would deflect the approaching asteroid by slamming into it, and hopefully altering the asteroid's trajectory just enough so that it misses Earth. DART is on its way to do just that with an asteroid named Dimorphos, far enough away from Earth that any change in trajectory of the asteroid should not pose any danger to our planet.

The scientists at Goddard Space Flight Center are keeping track of DART as it travels through space to ensure that it stays on path for impact. They are constantly checking its flight path and running computer simulations that predict just how the impact will change the orbit of Dimorphos. Telescopic observations will also be utilized by the team to determine the amount and composition of dust and volatiles released during impact.

Brent Barbee, dynamics verification and validation lead and DART flight dynamics support lead at Goddard, says, "We are an independent check on the mission's trajectory calculations." An in-house-developed Evolutionary Mission Trajectory Generator (EMTG) was used by the team at Goddard to provide independent verification and validation of the DART mission trajectories at various stages of the mission and appraise the ability of the mission to adapt to any missed thrusts and other probability.

Scientists at Goddard are also making use of specialized binary (double) asteroid dynamics simulation code developed by the mission's investigation team in order to calculate how the impact will disrupt the orbit of Dimorphos. The group at Goddard crafted a version of the tool for the DART mission, while adding features and functionality. Barbee said, "Our simulation results shed light on how DART's impact will change the dynamics of the system in ways that are detectable via remote observations." 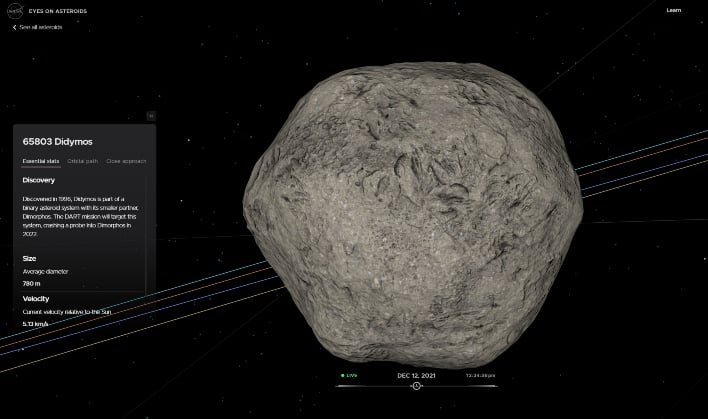 All of the simulations that were done before launch helped ensure that the DART impact would meet mission requirements, even if impact circumstances were not ideal. Joshua Lyzhoft of Goddard stated, "We will also be updating the simulations during the mission using observations to help ascertain how much DART's impact changed the momentum of Dimorphos, which is an important goal of the mission."

The spacecraft is on course to impact Dimorphos in late September, 2022, when the Didymos system is about 6.8 million miles (11 million kilometers) from Earth. This will enable ground-based telescopes and planetary radar to measure the change in momentum imparted to the moonlet.

Stefanie Milam of Goddard said, "We'll determine the amount of dust released during impact, as well as the amount and nature of any potential volatiles, through high-resolution radio-telescope observations with the Atacama Large Millimeter Array (ALMA) as well as other radio (millimeter/submillimeter) facilities. Additionally, there will be observations with the James Webb Space Telescope of Didymos during and after impact to also monitor dust released during the event."

With a little less than a year before DART makes its rendezvous with destiny, there is much left for the team tracking it to do. Ensuring that the spacecraft stays on course and continues to function properly will be a high priority. And don't forget, you too can follow along with the team by using the "Eyes on Asteroids" application as well as keep an eye on all the other objects in space that orbit around us.