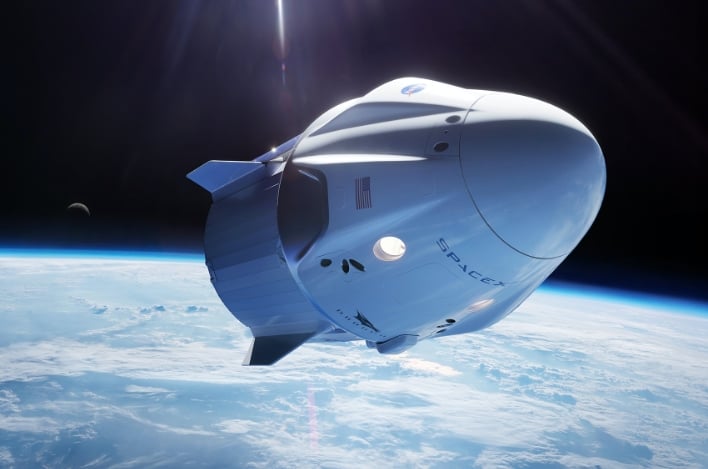 It’s hard to believe that it’s been nearly a decade since the Space Shuttle was officially retired, effectively putting an end to a 50-year-long streak in which the United States ferried its own astronauts into orbit around the Earth and Moon. Starting with the Mercury program, and then advancing through Gemini, Apollo, and finally the Space Shuttle, NASA was at the forefront of manned spaceflight.

However, budgetary considerations and a redirection of resources for the future of NASA’s manned spaceflight program meant that U.S. astronauts had to hitch a ride to the International Space Station (ISS) aboard Russian rockets for the past 9 years. That all ends next month, however. NASA announced today that as part of its Commercial Crew Program, the first manned flight will blast off on May 27th at 4:32pm from Launch Complex 39A in Cape Canaveral, Florida.

SpaceX has proven itself to be capable of safely and efficiently putting cargo into space and pushing the envelope when it comes to rocket design and capabilities (i.e. Falcon Heavy). So, it should come as no surprise that the two astronauts for this mission -- Robert Behnken and Douglas Hurley – will be aboard a Crew Dragon spacecraft atop a Falcon 9 rocket.

Behnken will serve as joint operations commander on the mission, where he will be responsible for rendezvous, docking and undocking from the ISS. Hurley will be the spacecraft commander responsible for launch, landing, and recovery duties. Both have completed two previous trips into space aboard the retired Space Shuttle.

On this test mission, the Crew Dragon will orbit the Earth while testing environmental control system and other onboard functions. It will then alter its trajectory to intercept the ISS, after which docking will be accomplished autonomously by the spacecraft (although human control is possible it the need arises).

At this time, NASA has not settled on a set duration for this mission, but the Crew Dragon is capable of staying in space for up to 210 days.

On a more personal note, I had the wonderful opportunity to visit NASA four years ago to get a look behind the scenes at the agency’s facilities, launch pads, the massive Vehicle Assembly Building, the ginormous “crawler” that carried the Space Shuttle to the launch pad, and even witness a nighttime ULA launch. As someone that has been deeply interested in and amazed by all things space-related since the age of 6, next month’s launch will be a momentous occasion in the future of U.S. manned spaceflight that will be watched by millions around the globe.