SpaceX lost a rocket today and they could not be happier. The company just successfully tested out its emergency escape system and its ability to keep astronauts safe. The test is an important step to take before NASA will allow SpaceX to carry astronauts into space. It is important to note that the test was unmanned.

SpaceX launched the Crew Dragon capsule on a Falcon 9 rocket from the historic Launch Complex 39A (LC-39A) at NASA’s Kennedy Space Center in Cape Canaveral, Florida. The launch window opened at 8am EST, but the launch itself was postponed due to weather conditions. The rocket was successfully launched at 10:30am EST.

The Dragon Crew capsule is intended to carry passengers, and the capsule itself includes eight SuperDraco engines that would be used should the Falcon 9 rocket fail. The test was essentially meant to demonstrate the efficacy and reliability of these back-up engines.

The capsule splashed down into the Atlantic Ocean within nine minutes after launch. This was slightly quicker than originally anticipated, but a rescue ship was standing by and immediately began recovery operations. Air Force Detachment-3 personnel will work alongside SpaceX to recover the capsule. 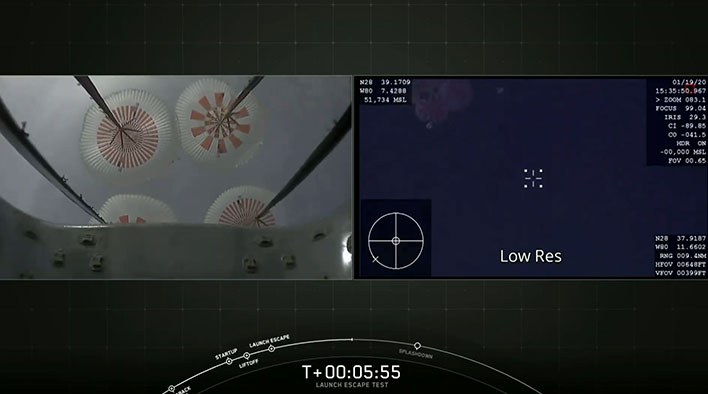 If there had been astronauts on the capsule, their recovery would have been the main priority. United States military pararescue specialists, or “Guardian Angels”, would have immediately gone to their rescue. The Guardian Angels would provide an inflatable raft with a small cover and several days of medical supplies and food.

SpaceX crewed flights are expected to launch in March 2020 should there be no further issues. It is believed that the first crewed flight would carry Doug Hurley and Bob Behnken to the International Space Station (ISS). Today’s test is a crucial step towards this anticipated crewed flight.