Could we live on other planets in our solar system or is such a dream a mere fantasy? Dr. Jim Green, the current National Aeronautics and Space Administration’s (NASA) Chief Scientist, recently argued that we could potentially terraform Mars and Venus. However, Green also contends human beings must stop “screwing around” and develop a better communication system before we can possibly terraform other planets.

Dr. Green argues that a lack of proper communication and classification have led to scientists "...screwing around with just crying wolf." He was one of the scientists who proposed this past autumn a scale to help others verify life on other planets. The "confidence of life detection" (CoLD) scale is a seven-step framework in which scientists determine the likelihood of alien life. A Level 1 states that there has been a "detection of a signal known to result from a biological activity," while a Level 7 notes that there have been "independent, follow-up observations of predicted biological behavior in the environment" of a planet.

This kind of scale is especially important given the number of red herrings scientists have encountered. Dr. Green noted that scientists several years ago claimed that they had discovered phosphine in the Venusian atmosphere. These scientists therefore argued that there had once been a lot of lifeforms on Venus. Unfortunately, the scientists later discovered that their signal had been contaminated. Dr. Green used this example to argue that "...we have to do a better job in communicating." Venus would currently be rated a Level 1 according to the CoLD scale. 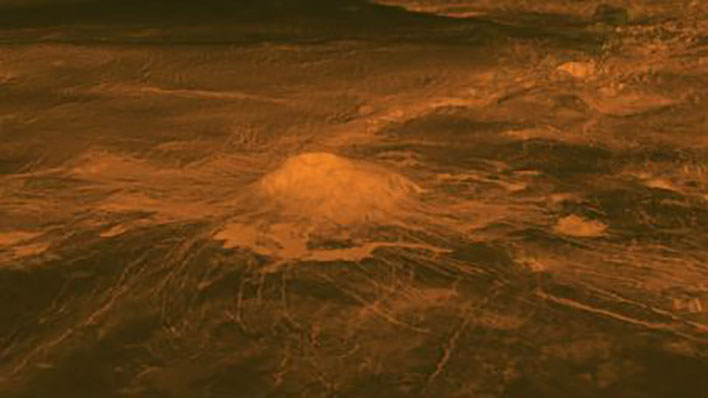 Image of the volcanic peak Idunn Mons on Venus

Dr. Green also insisted that we should not abandon planets that do not rate high on the CoLD scale. He remarked that Mars is only at Level 3. Nevertheless, he noted, "if a scientist came to me and said, ‘Here’s an instrument that will make it a CoLD Level 4,’ I’d fund that mission in a minute. They’re not jumping to seven, they’re making that next big step, the right step, to make progress to actually finding life."

What would it take to actually terraform planets? Besides ample and methodological communication, Dr. Green suggests that we could potentially place a giant magnetic shield between Mars and the Sun. It is currently believed that Mars was once potentially a "blue" planet but lost its shield 3.5 billion years ago. This caused water to evaporate from the Martian surface. The shield would prevent the sun from "stripping" the Martian atmosphere and allow the pressure, and in turn the temperature, to increase. Green believes this would cause Mars to "start terraforming itself." A physical shield between Venus and the Sun that would reflect light would essentially cause the opposite effect and allow the pressure and temperature to decrease.

Terraforming will not happen any time soon. Dr. Green and other scientists are far more concerned at the moment with detecting signs of life and developing better ways to communicate their findings. One of NASA’s most recent focuses is the Europa Clipper mission. The mission’s goal is to investigate the plumes that erupted from Europa in 2013 and discover any signs of life. Perhaps they will find Eramis and the House of Salvation hanging out on Europa.