You Say Tomato, NASA Says Let's Grow Them In Space And Feed Them To Astronauts

NASA and its international partners began installing a new space botany experiment last week that will help astronauts to learn how to grow fresh food on the International Space Station for several years. The first veggie of choice will be the dwarf tomato, with astronauts testing various fertilizer techniques, microbial food safety, and more.

With NASA looking to build a space station on the Moon, and to eventually send manned missions to Mars, figuring out new and inventive ways to keep a crew fed for the duration of the missions is a high priority. Growing fresh food during those future missions will be vital. This is why it is so exciting and important that the new Veg-05 space agriculture study is taking place now aboard ISS.

The Pick-and-Eat Salad-Crop Productivity, Nutritional Value, and Acceptability to Supplement the ISS Food System (Veg-05) is the "next step in efforts to address the need for the continuous fresh-food production system in space." NASA Flight Engineer Nicole Mann began installing the new Veg-05 space agriculture study on December 1, 2022. The research of Veg-05 expands to include dwarf tomatoes and focuses on the impact of light quality and fertilizer on fruit production. 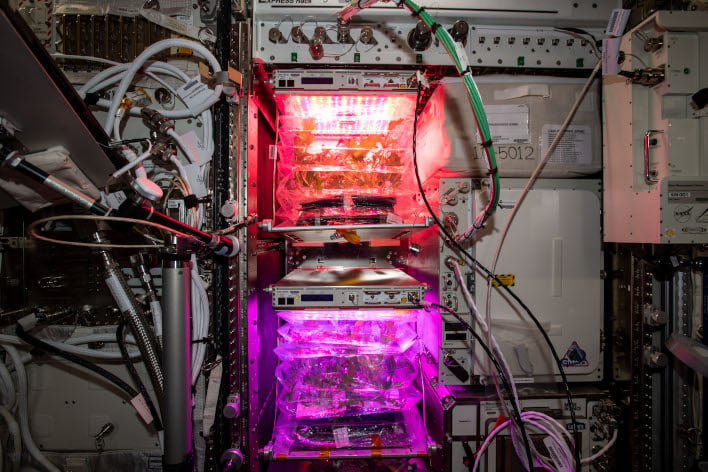 While the team of astronauts aboard ISS is conducting their study, ground studies are taking place in parallel in order to determine the effects of spaceflight on fruit crop growth. Once the tomatoes are ready to eat, astronauts are asked to rate the flavor, texture, juiciness, etc., of the produce that was yielded under different light treatments.

Another part of the study focuses on the mental health of the crew. Crew members are asked to take surveys to evaluate their moods and assess any type of psychological benefits that may be had through interacting with the plants during spaceflight.

There are some aspects that are also being studied in relation to Earth applications. With the world population continuing to grow, there is a need to investigate new ways of producing healthy food beyond traditional farms. Results from Veg-05 are expected to translate into improved biomass and agricultural production efforts on Earth. Another possible use is creating miniature greenhouses for therapy for elderly or disabled individuals, or for individuals who do not have access to a yard.