For the first time ever, NASA has put a helicopter on the surface of Mars, the fourth planet from the Sun that is located more than 168 million miles from wherever you are reading this right now. NASA is planning for the helicopter, called Ingenuity, to take its first flight on Mars, during which it will hover several feet above ground for around half a minute.
Why bother, you might be wondering? It is really about data collection, which could help with bigger projects in the future. NASA describes it as a technology demonstration in an effort to test a new capability, with limited scope (Ingenuity does not carry any science instruments).

"NASA’s Ingenuity Mars Helicopter is the first aircraft humanity has sent to another planet to attempt powered, controlled flight. If its experimental flight test program succeeds, the data returned could benefit future explorations of the Red Planet—including those by astronauts—by adding the aerial dimension, which is not available today," NASA explains. 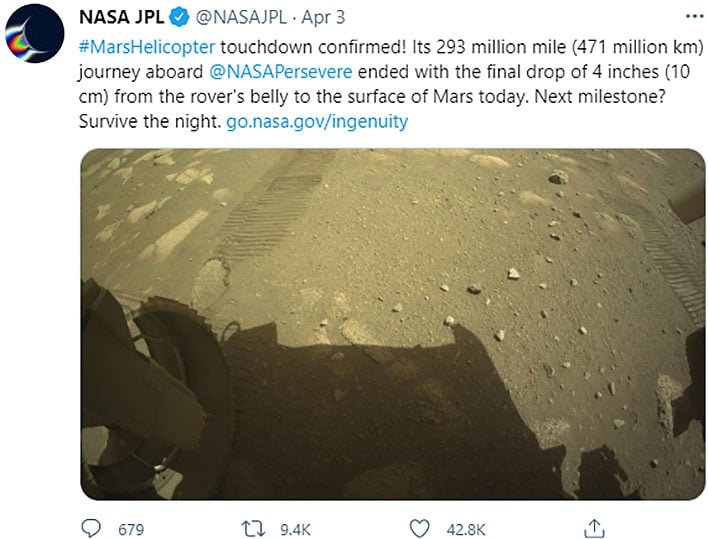 Ingenuity hitched a ride on the underbelly of NASA's Perseverance rover, where it was lowered 4 inches to the ground on Mars over the weekend.
While technically a helicopter, Ingenuity looks like a drone. It weighs just 4 pounds (1.8kg). More than just a glorified drone, though, Ingenuity is also a smart robot, in the sense that it has to make "some of its own decisions, based on parameters set its engineers." That's because the delay in communication from Mars to Earth negates being able to fly it with joystick.
Part of that decision making process involves analyzing data from a programmable thermostat. Ingenuity will also analyze its sensor data and images of the terrain to avoid going off course during its short flights (NASA hopes to fly it up to five times over the course of a month) around the Jezero crater on Mars. 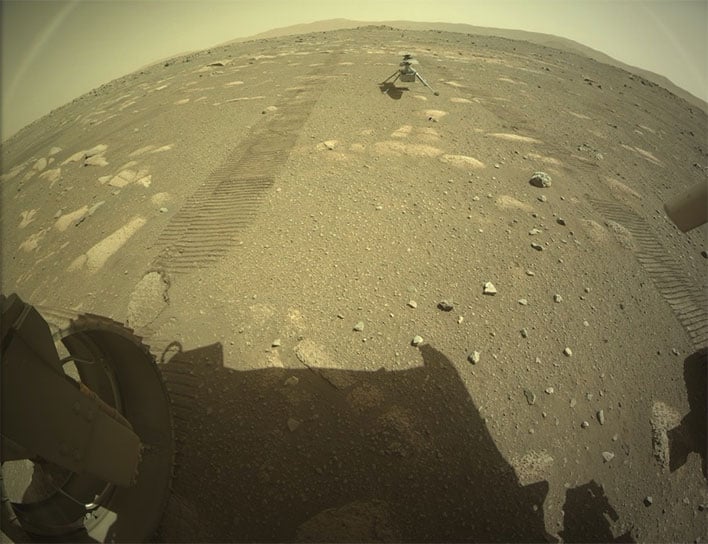 While limited in scope, this is a pretty remarkable achievement. As NASA points out, it took centuries and plenty of trial and error to figure out how to fly helicopters and planes on Earth.

"In careful steps over six years, engineers on the Ingenuity team were able to demonstrate that it was possible to build something ultra-lightweight that could generate enough lift in Mars’ thin atmosphere to take off from the ground, and that could operate and survive autonomously in the challenging Martian environment," NASA says.
The helicopter faces lots of challenges, like successfully swapping out its own batteries, charging itself with its solar panel, and even just autonomously keeping warm throughout the night when temps can drop to -100F (-73C). It has a battery powered heater that will keep its temperature at around 5F (-15C). Brrr!

If all goes to plan, each flight will be a little longer than the previous one. This creates suspense as well, as NASA's engineers will not have real-time data on how these flights go.
Our hats are off to the bright minds at NASA.
Images Source: NASA/JPL-Caltech