NASA is scheduled to share the first full-color images from the James Webb Space Telescope (JWST) in less than a week. Ahead of that release, the team captured a rather impressive image of deep space with one of its instruments whose primary purpose, incidentally, is not actually taking pictures.

The world awaits July 12, 2022, when NASA will finally share the first full-color images from JWST. The journey has been a long one, with the spacecraft having travelled nearly one million miles from Earth. The journey has not been all smooth sailing, as a micrometeoroid slammed into one of the telescope's primary mirror segments sometime between May 23 and 25, 2022. NASA said not to worry, however, that the $10 billion space telescope would be just fine. Now the space agency has released an image taken by its Fine Guidance Sensor (FGS) that shows a bit of JWST's potential ahead of next week.

While FGS is capable of capturing imagery, its primary purpose is to enable accurate science measurements and imaging with precision pointing. When it does take a picture, those images are normally discarded. This is mainly due to the fact that the communications bandwidth between L2 and Earth is limited, and Webb typically only sends data from up to two science instruments at a time. But during a week-long stability test back in May, the team decided they could keep the imagery from FGS because there was available bandwidth.

The team admits that the engineering test image has some "rough-around-the-edges" qualities to it, as it was not optimized to be a science observation. Even so, to the untrained eye the image is quite spectacular. The image does have some of the hallmarks of other test images taken since the launch of JWST. Brighter stars are seen with their trademark six, long, sharply defined diffraction spikes, an effect that occurs due to Webb's six-sided mirror segments. Dimmer stars and galaxies fill out the rest of the background. 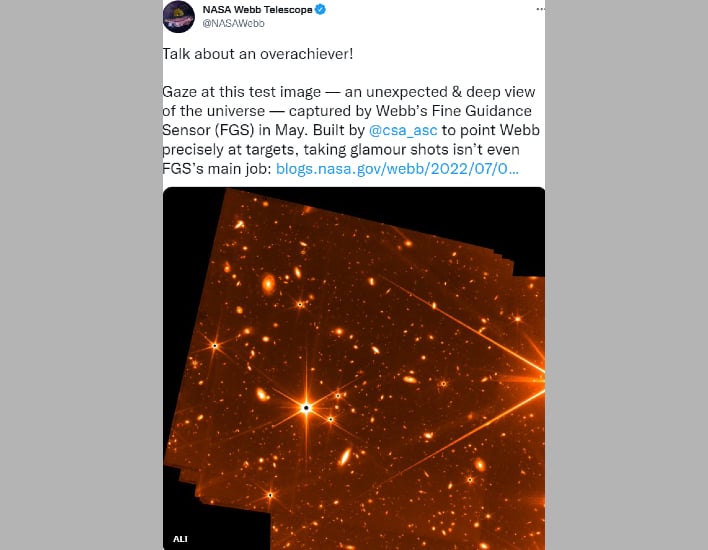 The resulting image was captured using 72 exposures over a 32 hour period, and is one of the deepest images ever taken of the universe, according to Webb scientists. One of the reasons FGS is not used as a primary camera, is due to the fact that when its aperture is open, it does not utilize color filters like the other science instruments. This makes it impossible for scientists to study the age of the galaxies captured within an image with the standard needed for scientific analysis.

"With the Webb telescope achieving better-than-expected image quality, early in commissioning we intentionally defocused the guiders by a small amount to help ensure they met their performance requirements. When this image was taken, I was thrilled to clearly see all the detailed structure in these faint galaxies. Given what we now know is possible with deep broad-band guider images, perhaps such images, taken in parallel with other observations where feasible, could prove scientifically useful in the future," remarked Neil Rowlands, program scientist for Webb's Fine Guidance Sensor, at Honeywell Aerospace.

The test image should give all awaiting the first full-color images next week even more reason to be excited. JWST presents an opportunity to explore deep space in ways never possible before. Because of this, astronomers and scientists are hoping to be able to answer long held questions about the universe. "The faintest blobs in this image are exactly the types of faint galaxies that Webb will study in its first year of science operations," stated Jane Rigby, Webb's operations scientist at NASA's Goddard Space Flight Center in Greenbelt, Maryland.