A series of sonic booms were heard across Central Florida on Saturday, as an autonomous spaceplane returned to Earth. The Boeing X-37B had spent over 900 days in space on a U.S. Air Force and U.S. Space Force mission.

Residents in Central Florida took to social media in the early morning hours of November 12, 2022, with reports of sonic booms being heard. The loud booms had people confused initially, with one person tweeting, "Woke me up, thought something hit the house, Facebook and Twitter seemed to confirm it was what I thought, sonic boom seems likely." It wasn't until a little later in the day that the U.S. Space Force confirmed that a secret spaceplane returning to Earth was the cause of the sonic booms.


Other residents tweeted that the sonic booms shook their homes and rattled windows, while others thought they were simply hearing things at first. A few people were able to capture audio of the sonic booms with their home security systems. Footage of the event, shown above, was shared on Fox 35 in Orlando, Florida.

In a press release, the U.S. Space Force confirmed the X-37B Orbital Test Vehicle-6 (OTV-6), an unmanned, reusable spaceplane, returned to NASA's Kennedy Space Center Shuttle Landing Facility on November 12, 2022, at 5:22 a.m. This was the sixth mission, which conducted "on-orbit experiments" over the course of 908 days.

Gen. Chance Saltzman, Chief of Space Operations, stated, "This mission highlights the Space Force's focus on collaboration in space exploration and expanding low-cost access to space for our partners, within and outside of the Department of the Air Force (DAF)." 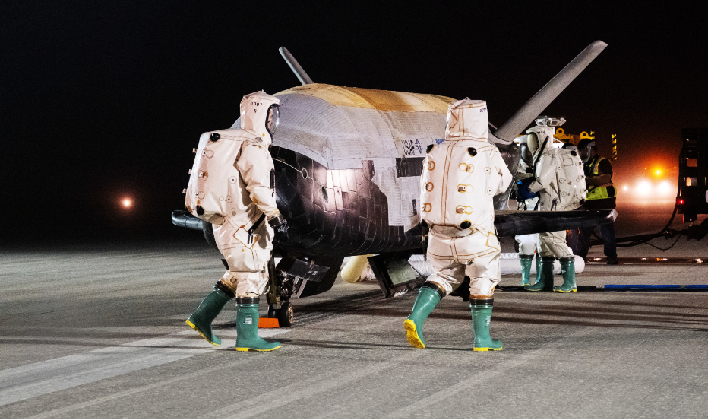 One of the experiments aboard the spaceplane was the Naval Research Laboratory's Photovoltaic Radiofrequency Antenna Module. The experiment "successfully harnessed solar rays outside of Earth's atmosphere and aimed to transmit power to the ground in the form of radio frequency microwave energy," according to the press release.

"The X-37B continues to push the boundaries of experimentation, enabled by an elite government and industry team behind the scenes," remarked Lt. Col. Joseph Fritschen, DAF Rapid Capabilities Office's X-37B Program Director. "The ability to conduct on-orbit experiments and bring them home safely for in-depth analysis on the ground has proven valuable for the Department of the Air Force and scientific community." Fritschen added that an additional service module on the OTV-6 allowed for more experiments than ever before.