Twitter is still chugging along despite its shrinking workforce, and new owner Elon Musk continues to pop up and make promises almost whenever he's summoned. It can be hard to keep track of all the things Musk claims he's going to do, particularly since he started posting his every thought on Twitter. Now, the billionaire Twitter owner says he'll make his own phone if Apple and Google dare to remove Twitter from their app stores.

The problem: both Apple and Google have rules against apps that allow hate speech or harassment and a core part of Musk's approach to managing Twitter is to do less managing. After buying the company in a $44 billion deal, he fired about half of the company's workforce. Then he issued an ultimatum demanding longer hours to build "Twitter 2.0" which chased off another sizable chunk of the staff. Among the functions falling by the wayside is content moderation, which Musk frames as a commitment to free speech (as long as it doesn't upset him personally). 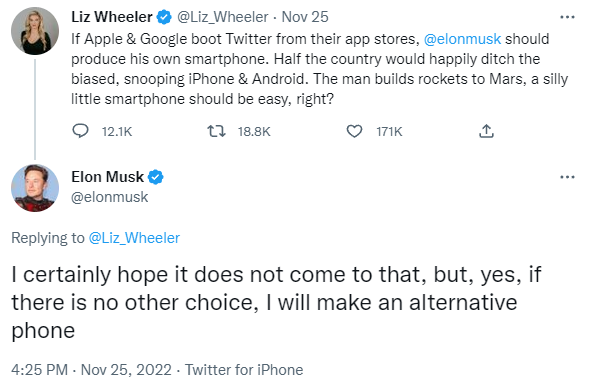 Other "free speech" social networks like Gab and Parler have had trouble remaining on the Apple App Store and Google Play Store due to their lack of content moderation. If Twitter suffers a similar fate, conservative podcaster Liz Wheeler suggested Musk should make an alternative phone. Just a few hours later, Musk said he'd do that if there was no other choice. Wheeler followed up with a poll asking if people would use a "tELONphone," and a slim majority of her followers said they would. Musk often uses polls to enact new policies on Twitter, so this seems like a direct appeal to his ego.

It's easy for a very rich man who has historically gotten his way to say he's going to do something like build his own smartphone, but it's not as simple as it sounds to compete with Apple and Google—just ask Microsoft, Palm, and BlackBerry. What would such a device even look like? Both iOS and Android are mature products with years of feature enhancements. So, building something from scratch would be a monumental undertaking. The Musk Phone could take the shortcut many have and simply use Android as a base upon which to build a new platform. Although, is an Android fork with Twitter pre-installed going to entice people? Probably not.