Twitter's Demise Is All Anyone Can Talk About...On Twitter

Hundreds of Twitter employees are said to be exiting the company following an ultimatum from Musk to work "long hours at high intensity" or leave. Elon Musk already fired half of the workforce, including top management, and introduced a new Twitter Blue subscription plan in a bid to make the company profitable since taking over.

Twitter's fate has been the topic of an abundance of tweets as of late, with many saying the social media platform is already dead (using Tweets nonetheless). Users have been sharing where followers can find them on other platforms, just in case Twitter ceases to exist in the near future. Others, however, have been pointing out that Twitter is still alive, including Elon Musk. All of this comes amid hundreds of employees exiting the company in the last 24 hours or so. 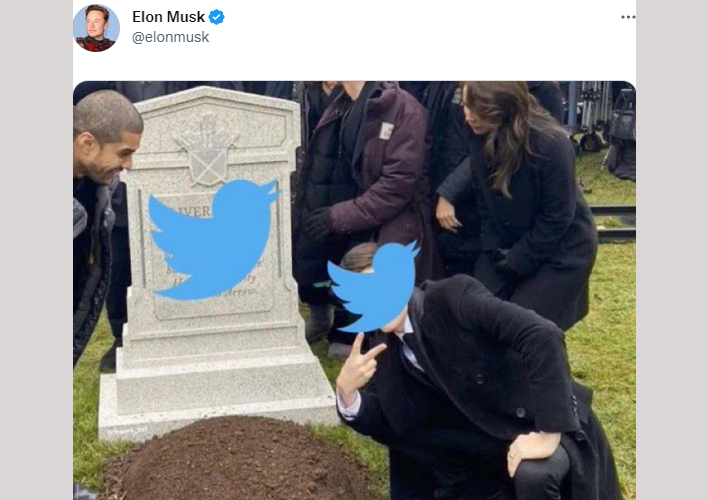 According to a current Twitter employee and a recently departed employee, Musk met with some of the top employees to try and convince them to stay and ride out the storm with him. Reuters said its sources also indicated that the company has notified employees that it will close its offices and cut all badge access until Monday. One source even stated that security officers were kicking some employees out of one office on Thursday evening.

Reuters estimates a little over 100 employees posted Tweets announcing their resignation from the embroiled company. A few announced their intention of staying with the company, with most of those in ad sales.

Musk has taken a few jabs at the "Twitter Is Dead" party with a few Tweets of his own. The billionaire Tweeted "And ... we just hit another all-time high in Twitter usage lol," followed by, "Let that sink in ..."

Musk's Tweets have garnered more than a few replies, with some taking up for Musk, while others continue to insist the platform is done for. Regardless of which side the reply may fall, they all bolster the overall performance of the platform. An example is a tweet from Musk showing people at a graveside seemingly reveling in the death of Twitter. The Tweet has received 1.4 million likes, over 180K retweets, and more than 155K Quote Tweets.

Even in the midst of many saying they are leaving Twitter, it is not clear where they are going. Some have said they made accounts on Mastodon and asked people to follow them there. Others are sharing their Facebook, Instagram, and other various social media handles for people to follow them on. So far, however, it seems the majority of them have yet to cut the cord completely on Twitter, as they continue to post somewhat ironic Tweets about how Twitter is dead.

Are you still using Twitter? If not, what social media platforms are you currently using? Let us know in the comments if you think Twitter is "dead".