While we tend to think of the computer industry as centered on Taiwan, the companies that do most of the R&D are all based in the US, including AMD, NVIDIA, Intel, IBM, Qualcomm, and others. China would like to have its own home-grown processors, so it's been dumping a lot of money into companies that claim to make CPUs and GPUs. Now, those efforts are finally bearing fruit. Case in point: Moore Threads' S80 GPU, which EXPReview just benchmarked against the GeForce RTX 3060.

Moore Threads, which also goes by the initialism MTT, intends to build GPUs for every market, from consumer gaming all the way up to hyperscale enterprise. The S80 is the company's first retail product, and on paper, the specifications are pretty impressive for a first effort, and in fact rather similar to both Intel's Arc Alchemist DG2-512 as well as NVIDIA's GA106.

With 4096 shaders, 16GB of GDDR6 memory, a 256-bit memory bus, and a 255W TDP, this 7nm GPU looks well-equipped to handle gaming workloads. Even the clock rate of 1.8 GHz is very similar to the GeForce RTX 3060's 1.77 GHz rated boost clock. MTT's GPU also sports PCIe 5.0 support, which is actually a world first for GPUs. Kudos to MTT for that, although we must admit that it doesn't actually matter for the overwhelming majority of use cases.

The Chinese government is naturally more concerned with compute and AI tasks than gaming, so the MUSA architecture on which MTT's S80 GPU is based is supposedly very suited to these functions. It includes 128 tensor processors, and EXPReview reports that it supports full-speed FP16 compute where NVIDIA neuters this function on its consumer-focused GeForce GPUs. 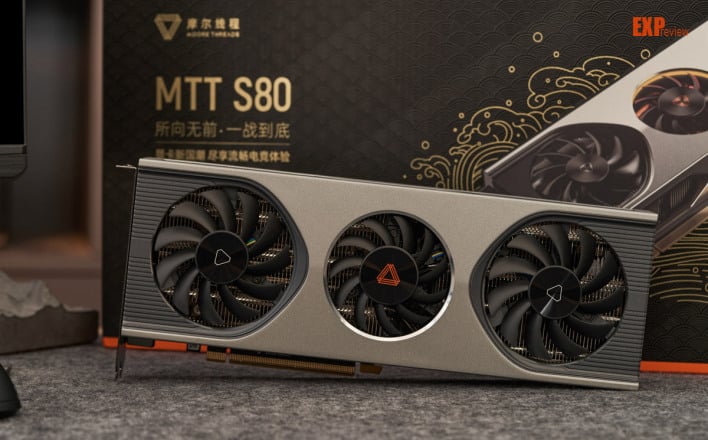 Even still, this attractive card is clearly intended for a gaming audience as well, given the price and design. So how does it actually do? It's actually a little difficult to say given EXPReview's choice of benchmarks, but overall results are very mixed. 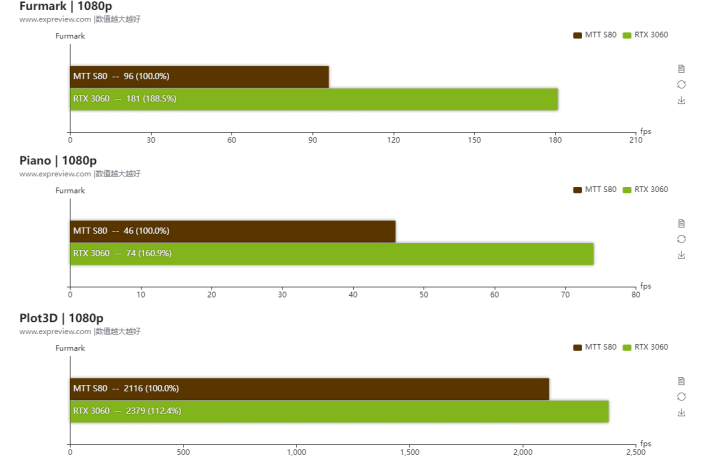 The site only directly compared MTT's GPU against the GeForce card in synthetic benchmarks, where the RTX 3060 runs away with almost every test. In Unigine Valley, the RTX 3060 scores 197.9 FPS in the DX 9 test at 4K, but the MTT S80 scores just 26.1 FPS. That's the worst-case for the S80, though; most of the results are more like Furmark, where the RTX 3060 comes out ahead by "only" 188%.

As for actual games, League of Legends hits 128 FPS in 4K resolution, but only 149 FPS in 1080p. The site tested with a Core i7-12700K, so that's clearly not the issue. CrossFire, an FPS game similar to Counter-Strike that's popular in Asia, runs at 165 FPS in 4K but again, only 182 FPS in 1080p. Even the 4K results aren't actually that impressive for an eSports title from 2007. Likewise, 87 FPS at 4K in Ultra Street Fighter IV isn't knocking our socks off considering that game is from 2009 and can run on Intel's 4th-gen integrated graphics at full speed.

The most recent game that EXPReview tested on the MTT S80 was the Final Fantasy 14: Heavensward benchmark. The site reports that running the benchmark in DirectX 11 mode gives texture and rendering errors, but in DirectX 9 it was able to put up 43 FPS in 4K. Like with the rest of the games, EXPReview didn't do direct comparisons against the GeForce RTX 3060, but the listed score is around one-third of that which we got with an Intel Arc A770—and that GPU was crushed by an RTX 3060 in this benchmark.

In case you weren't aware, China is under the weight of heavy export sanctions on advanced technology from the United States. It follows that the nation wants its own home-grown silicon to reduce its reliance on American technology. MTT's freshman effort here doesn't come out of this benchmark battle smelling rosy, but EXPReview suggests that the results are mostly down to very immature drivers, and we can certainly see that.

Graphics drivers are among some of the most complicated applications developed today, and even a company like Intel is struggling to get its GPU software in order. The fact that Moore Threads' GPU is even able to have working Windows drivers at all that can run PC games is pretty impressive. After all, the whole company is only two years old.

Still, MTT is going to have to get these issues sorted out if it wants to move many of these GPUs. EXPReview picked up the card for 2999 RMB (about $420 USD) in a bundle with the ASUS TUF GAMING B660M-PLUS D4 motherboard. Even if we deduct the full value of that board from the bundle, we're still talking about a $250 graphics card that struggles mightily against NVIDIA's two-year-old mid-range and has sharply-limited feature support.

We're considering getting an S80 for ourselves to put it through the paces. Until then, we'll keep an eye out for more news about Moore Threads, because adding yet another GPU player to the market is always an interesting prospect.