Around a month ago, MSI teased us with renders depicting its stunning MEG Z690 Godlike motherboard for Intel's Alder Lake platform. We're still waiting for it to release. Until it does, we have some delightful photos to feast our eyeballs on, courtesy of a popular leaker who uploaded a small handful of product shots to Twittter.
You can see the two main ones above. The actual motherboard is on the left while the retail packaging sits on the right. Or perhaps that is the retail packaging for reviewers only. Zooming into the lower-right corner reveals some interesting text. 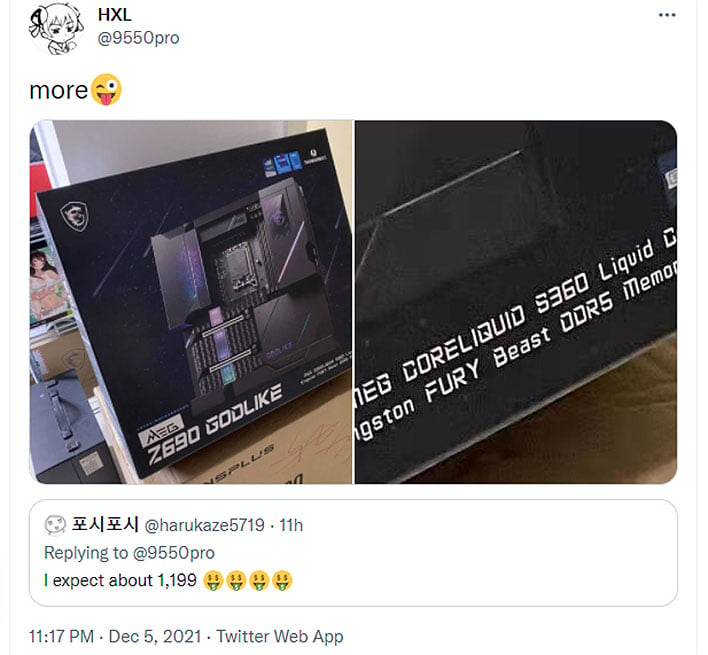 "MEG CoreLiquid S360 liquid cooling and Kingston Fury Beast DDR5 memory included," the packaging states.
We're not aware of any prior Godlike models shipping with bundled AIO coolers and memory. However, given the premium pricing that gets attached to the Godlike series and the scarcity of DDR5 RAM, bundling those parts in would certainly be welcome. It probably wouldn't even matter if the bundled parts drove the price up a bit.
As for where pricing will land, another notable leaker (@harukaze5719) speculates it will come in at around $1,199. To put that into perspective, the MEG Z590 Godlike currently commands $884.99 on Amazon. That's its lowest price to date—it sold for as much as $999.99 this past summer. 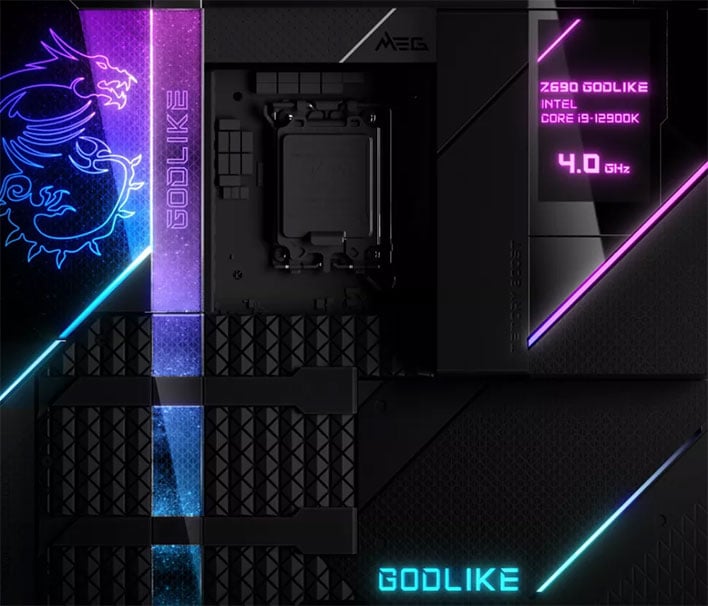 The MEG Z690 Godlike is shaping up to be a stunning board. Plastic coverings still adorn the motherboard's shrouds in the actual product photo, but in a previously shared render, MSI showed off RGB lighting and a 3.5-inch touchscreen display in the upper-right corner. The customizable LCD screen will provide certain system vitals, such as clock speeds and voltage.
While not visible in the above photos and renders, the square-shaped board is expected to arrive with a 22-phase power design, half a dozen M.2 slots, 10GbE connectivity, Thunderbolt 4 support, and a whole mess of USB ports.
Whether or not it retails at $1,199 may depend on if it actually comes with a cooler and RAM. DDR5 isn't cheap. Most of the kits so far have been 32GB in capacity (2x16GB), and if that's the case here, we could be looking at a few hundred dollars more than that.