Graphics cards based on NVIDIA's CMP HX GPUs are finally starting to trickle into the marketplace. So far, we've seen entries from ASUS and Gigabyte. Now, MSI is looking to get in on the action with its CMP 30HX Miner XS.

The CMP 30HX Miner XS has 1408 CUDA cores with a base clock of 1530MHz and a boost clock of 1785MHz. You'll also find 6GB of GDDR6 memory onboard. The card is rated at 125 watts, and it adheres to NVIDIA's spec'd 26 MH/s hash rate. The GPU found in the card isn't exactly a powerhouse (at least not by today's standards) and is cooled by a meager aluminum cooler and dual cooling fans backed by double ball bearings. 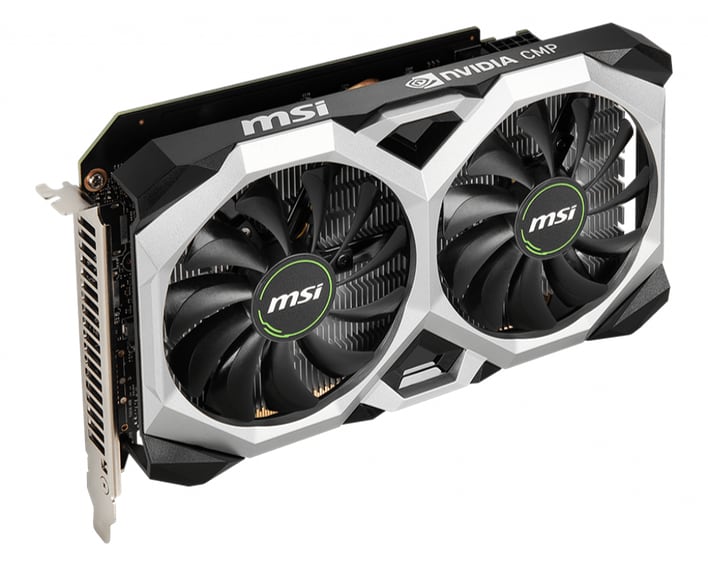 According to MSI's support information, its regular graphics cards come with a 3-year limited warranty. However, the CMP 30HX Miner XS is by no means a standard graphics card and will most likely have a shorter warranty period. After all, that is the case with Gigabyte's CMP 30HX counterpart. While Gigabyte's gaming cards come with a 3-year warranty, its CMP 30HX D6 6G is paired with a comparatively skimpy 3-month warranty. This reduction is expected given that these cards are running full-tilt 24-7-365. However, we don't know if MSI is taking the same drastic action with its warranty reduction on the CMP 30HX Miner XS (its specs sheet [PDF] makes no mention of warranty). We've reached out to the company for clarification on this matter.

NVIDIA's CMP HX family of Ethereum mining cards are part of a two-pronged attack at the GPU shortage affecting the enthusiast market. The CMP HX cards are built using GPUs that are not up to par for GeForce graphics cards. So, this gives NVIDIA a cost-effective way of repurposing those "defective" GPUs to address the growing needs of the mining community.