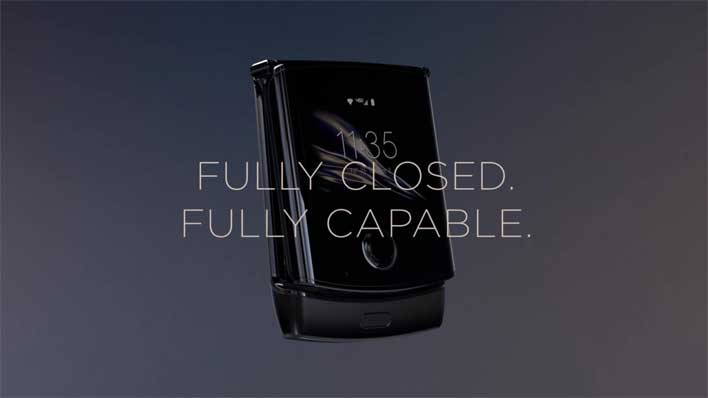 The Motorola Razr smartphone has been on the market for a few months, and has now received its most signifiant software update. The Razr Android 10 update began rolling out yesterday, and Motorola is highlighting some of the new features and functionality that the operating system update is bringing to the Quick View display on the outside of the smartphone. Motorola promises a streamlined new look and feel with significantly improved and expanded functionality for the external display.

With Android 10 installed, Razr owners can call people without having to open the device by swiping left on the front display to access their favorite contacts. That feature is only available in the United States currently, but will roll out to other countries sometime this month. Owners can also read and respond to messages from the most popular messaging apps using Smart Reply or the new Quick View keyboard without having to open the smartphone.

Motorola has also expanded the capability of the front-facing Quick View camera to allow users to take selfies in new ways with the device closed, including supporting modes like Group Selfie, Portrait Mode, Spot Color, and others. Accessing the camera is quicker and more streamlined by using a right swipe when the device is closed and unlocked or by using Quick Capture with a twist of the wrist.

The Motorola Razr Android 10 update also brings more functionality and compatibility with apps, including access to Google Maps and music apps like Spotify, YouTube Music, and Pandora, all from the Quick View display. Additional themes allow users to customize the front screen to suit their style. Motorola promises to continue to prioritize and improve the experience of the Quick View display for the best experience possible.

Perhaps the update to Android 10 will make the Razr more appealing to users; it shipped with Android 9 out of the box, and many consumers/pundits panned that decision. The device hasn’t been as popular as Motorola hoped in part due to the price and the fear of poor durability. The company has even recently resorted to a buy one, get one free promotion to move stock during Mother's Day.