Folding screen smartphones are hard to get right at this early stage in the game. Samsung has proven this with the failure of its first-generation Galaxy Fold device, but it's back with a new folding smartphone called the Galaxy Z Flip, and it remains to be seen if that device is durable enough for the real world. The direct competition for the Galaxy Z Flip is the Motorola Razr, and the smartphone isn't doing well for some users. A reviewer has posted images of the smartphone that Input purchased for testing, and the display is failing spectacularly.

After only a little over a week of use, Input's Raymond Wong has shared images of the Motorola Razr the publication has been reviewing with a significant failure of the screen. The flexible OLED is still working and appears as bright as ever. The problem is the plastic coating over the screen has begun to separate from the OLED underneath at the hinge. 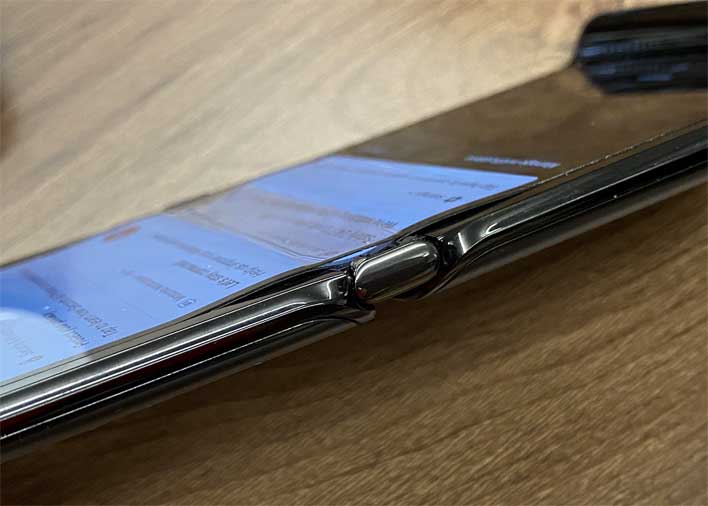 He also says that his jeans aren't super tight. Even if they were the skinniest of skinny jeans, the Razr should be able to survive life in a pocket; otherwise, what's the point. Wong says that the top layer was raised from the screen and that the screen was "completely warped" hinge-to-hinge and looked like a poorly applied screen protector. The reviewer notes that he is afraid to fold the device now because the more often it is closed, the wider the gap gets.

The damage is more than looks, the touchscreen is semi-broken, and the warped screen makes touches and taps "virtually unresponsive," particularly in the Settings app. The top and bottom sections where the screen is still laminated work without issue. The issue may be temperature related; the reviewer used the phone to snap images outside when it was 28 to 30 degrees, but the device should be able to survive winter. Motorola hasn't commented on the issue at this time. In a recent hinge test, the Razr hinge failed early, but Motorola said the testers were folding it wrong.