Motorola is aiming to give Apple's iPhone SE some competition in the affordable smartphone space. The handset maker unveiled two phones today, the Moto E (pictured above) starting at just $149, and the Moto G Fast starting at $199.99. Both will begin shipping next week and will give budget buyers some more options to choose from, well outside of the range of flagship $1,000+ phones that permeate the market.
The Moto E is an unlocked handset sporting a 6.2-inch Max Vision display with a 1520x720 resolution, powered by a Qualcomm Snapdragon 632 processor and 2GB of RAM. It offers just 32GB of built-in storage, though Moto E owners have the option of adding up to 512GB more storage by way of a microSD card slot.
There is a 5-megapixel camera on the front of the phone for taking selfies. On the rear, users have access to a 13-megapixel main camera (f/2.0 aperture) and a 2-megapixel depth sensor (f/2.2 aperture), along with an LED flash.
"With the Moto E, you can get creative and shoot brilliant, professional-quality photos in a snap with the dual camera system. Use the fast-focusing 13 MP camera to take sharp photos and use the depth sensor to play with depth of field for a pro-looking blurred out background and beautiful portraits," Motorola says.
This is all powered by a 3,550 mAh battery that Motorola claims is designed to last up to two days on a single charger.
Obviously these are not flagship specs, but the divide between the $149 asking price and what top-end smartphones command is rather large. And though the iPhone SE is a better overall handset, it is more than twice as much, starting at $399. 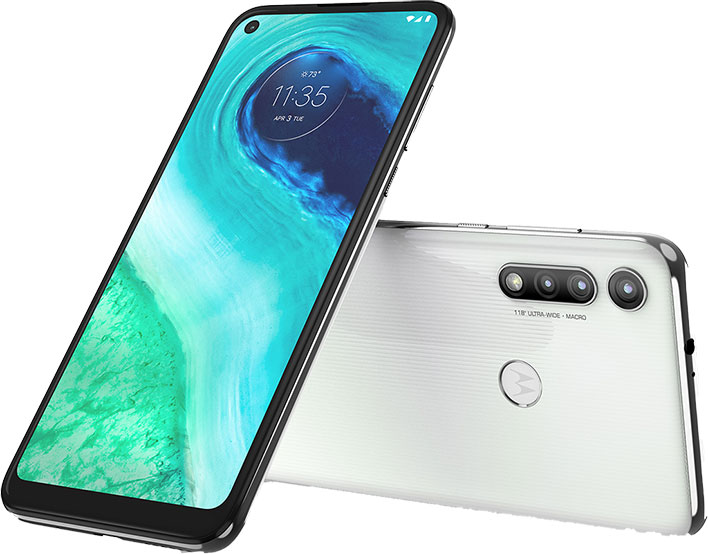 The Moto G Fast, meanwhile, is a little bigger and more fully featured, for those who have a bit extra to spend. It wields a 6.4-inch Max Vision display with the same 1560x720 resolution, but is powered by a Snapdragon 665 processor and 3GB of RAM.
Storage still checks in at a paltry 32GB, but like the Moto E, users can slide in a microSD card up to 512GB in capacity for some more wiggle room.
The camera configuration is upgraded as well. Motorola outfitted the Moto G Fast with an 8-megapixel camera on the front, and on the rear, users get a 16-megapixel shooter (f/1.7 aperture) for main camera chores, an 8-megapixel ultra-wide angle lens (f/2.2 aperture), and a 2-megapixel macro camera (f/2.2 aperture).
"Take sharp photos even in low light using the 16MP fast-focusing main camera on the Moto G Fast. For expansive panoramic photos or any time you want to squeeze all the action into one shot, you can fit 4x more in your frame using the ultra-wide angle lens.2 And the dedicated Macro Vision camera gets you 5x closer to your subject than a normal lens for incredible close ups where details make all the difference," Motorola says.
The Moto G Fast comes with a bigger battery, too—4,000 mAh that is also rated to deliver up to two days of runtime on a single charge.
Both the Moto E and Moto G Fast are available to preorder now, and will ship on June 12.