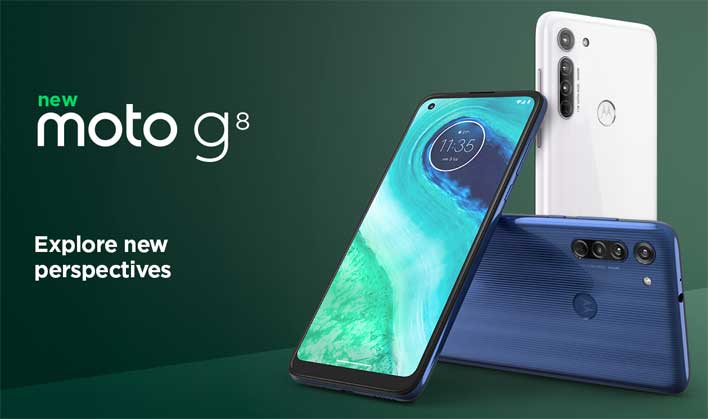 Motorola has rolled out a new smartphone called the Moto G8 that it is focusing on people who want a value-packed smartphone that offers high-quality photography. Motorola says that the G8 can capture a "perfect shot" no matter where you are or when you're taking photos thanks to an AI camera system. A 16-megapixel fast-focusing main camera can take sharp photos in lowlight conditions, according to Motorola. The phone is also fitted with an ultra-wide-angle lens that supports panoramic photos.

The smartphone also has a dedicated Macro Vision camera that's able to zoom in on a subject five times closer than a normal lens. The G8 also comes with a large 4000 mAh internal battery that promises all-day use on a single charge. Motorola designed Moto G8 to go up to 40 hours on a single charge. The display of the device is a 6.4-inch HD+ Max Vision display meant to have high-resolution quality for on the go entertainment.

An integrated loudspeaker provides sound for times when users don't want to wear headphones or want to share audio with multiple people. The brain of the device is a Qualcomm Snapdragon 665 octa-core processor paired with 4GB of RAM. The chipset has advanced AI processing capability and promises better gaming performance, camera features, and improved security. Internal storage is 64GB, and storage is expandable via an SD card of up to 512GB.

Moto G8 also comes with Moto Experiences and Moto Gametime software. The exclusive software is designed to maximize the gaming experience and make games more immersive by blocking interruptions so players can stay in the game. The device is water-repellent and promises a "bloatware-free and ultra-clean version of Android 10." The Moto G8 launched today in Brazil and will roll out in the coming weeks to Europe, Latin America, Asia, and Australia. Pricing will vary by region, and there's no mention of launch in the United States.

In other Motorola news, the company's Razr folding smartphone hit the market to mixed review over its performance, screen durability, and eye-popping price tag.