I've become a big fan of mini PC systems over the past few years, as it's pretty remarkable at how much power can be crammed into a such a compact package. It seems the bulk of them tend to adopt Intel hardware, which is fine, but what about AMD powered mini PCs? They exist, and Minisforum is releasing what it says is the first-ever model to employ a discrete AMD graphics chip.
Called the HX90G, we don't see it listed on the company's website yet, but the pertinent specs were provided to us in an emailed press release. According to the announcement, the HX90G will be part of a new product series called Neptune with some fancy AMD and Intel hardware on tap, including 12th Gen Alder Lake options and up to a Ryzen 9 6900HX Zen 3+ CPU.
As for the HX90G, it gets the Neptune series party started by pairing a Ryzen 9 5900HX with a Radeon RX 6650M, packing both inside a mini PC form factor that is 2.8L in volume.
While no longer the latest and greatest, the Ryzen 9 5900HX is still a stout mobile processor. It's an 8-core/16-thread Zen 3 chip with a 3.3GHz base clock, up to a 4.6GHz boost clock, and 20MB of L2+L3 cache (16MB L3, 4MB L2).
The Radeon RX 6650M, meanwhile, features a Navi 23 GPU based on AMD's RDNA 2 architecture. It's a mid-range graphics solution outfitted with 28 compute units, 1,729 stream processors, a 2,222MHz game frequency, 64 ROPs, and 8GB of 16Gbps GDDR6 tied to a 128-bit bus for up to 256GB/s of memory bandwidth. 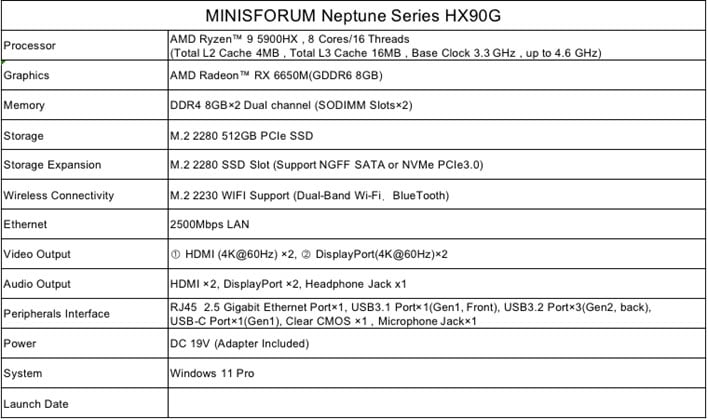 According to Minisforum, at full load the CPU consumes 50W of power and the GPU consumes 100W. It comes with a 260W power brick so that the GPU "can run at 100% without performance loss." And to keep things cool, it employs seven heat pipes (three for the CPU and four for the GPU), liquid metal TIM for both parts, and dual smart fans.
What about Hades Caynon with Radeon RX Vega graphics? That's technically an on-package solution so we'll give Minisforum on the 'first' claim.

There's no word yet on price, though as a point of reference, a barebones EliteMini HX90 with the same CPU is listed for $699 (on sale for $599 currently).