Sonic the Hedgehog is receiving a block makeover to celebrate its 30th anniversary (it’s hard to believe that it’s been that long). Rather than some new standalone, anniversary game to celebrate Sonic’s 30th, a collaboration with Mojang Studios has instead brought Sonic into the blocky world of Minecraft.

You’ll be able to play Sonic within the 3D confines of Minecraft, and at first glance, it looks pretty darn cool. The runner game allows you to play solo or with friends as you compete in races. And of course, those infamous Sonic rings are included in Minecraft, although they look more like golden squares instead of their original shape from the Sonic games.

“They are the blockiest rings you have ever laid your eyes on, and I love them,” writes Mojang’s Sofia Dankis. “I’m not saying there was anything wrong with the original rings, but these right angles just feel right. The rings aren’t the only thing that Sonic brought with him, there are also plenty of obstacles to dash past, bosses to defeat, and momentum to build as you run towards a high score.”

In the short trailer for the Sonic DLC, we caught several familiar faces, including Tails, Knuckles, and even Dr. Robotnik. Also available in-game are faithful recreations of Green Hills Zone and Chemical Plant Zone. 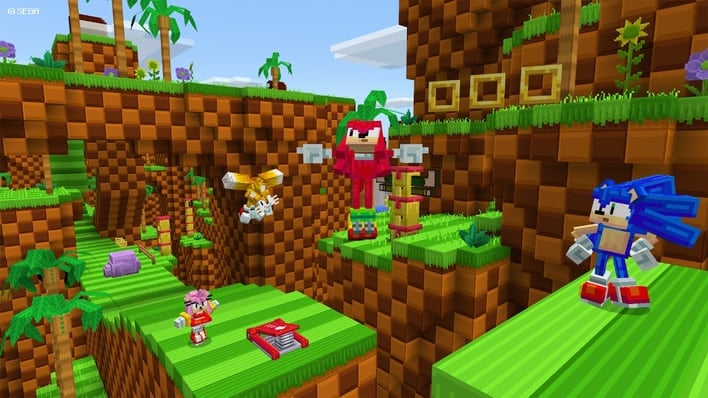 The birthday festivities will even include a special server event hosted by The Hive. It will consist of several mini-games and “festive surprises,” so be sure to check it out. However, remember that this is paid DLC, so you’ll have to obtain it from the Minecraft Marketplace with your stash of Minecoins.

You can download the new Sonic the Hedgehog DLC right now across all supported platforms (which is vast), including Xbox, PlayStation, Nintendo Switch, PC, iOS, and Android.