Apple's iMac Pro all-in-one desktop is long overdue for a refresh (or a comeback, if you prefer), and assuming one does come along, the expectation up to this point was that it would feature an existing M1 Pro or M1 Max processor. Perhaps not. A leaker with a decent track record tipping Apple products claims the iMac Pro is indeed coming and will feature an SoC "beyond" the M1 Max.
Maybe an M1 Super Max or M1 Max+, if Apple wants to roll with either of our suggestions. Whatever it ends up being called, however, it will be burlier than either the M1 Pro or M1 Max with, at the very least, more CPU cores.

"I have received confirmation that there will be an additional configuration for the upcoming iMac Pro beyond M1 Max. A 12-core CPU configuration was tied to a snippet of code referencing the iMac. The internal naming candidate is iMac Pro for a reason. It is targeted towards pros," leaker @dylandkt wrote on Twitter.
Both the M1 Pro and M1 Max are built on a 5-nanometer manufacturing process. The M1 Pro packs 33.7 billion transistors, up to 32GB of unified memory, up to 200GB/s of memory bandwidth, up to a 10-core CPU, and up to a 16-core GPU.
The M1 Max, meanwhile, kicks things up a notch with a 57-billion transistor design that also comes with up to 10 CPU cores, but supports up to a 32-core GPU paired with up to 64GB of unified memory for up to 400GB/s of memory bandwidth. Both chips feature a 16-core neural engine. 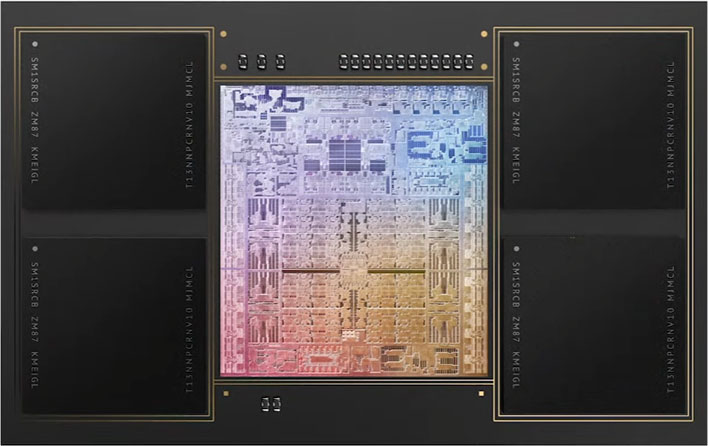 According to Dylan, the super M1 Max chip will tout a 12-core design on the CPU. There's no mention of any other upgrades, but those additional cores alone could offer a nice performance bump. It will be interesting to see how the cores are divvied up, though. In a fully loaded M1 Max, there are eight performance cores and two power efficient cores, for 10 cores total. A 12-core variant would likely see 10 performance cores paired with two power efficient cores, but we'll have to wait and see.
This also raises the questions of where those additional cores come from. Perhaps there are a couple of disabled cores on the M1 Max, or maybe this is a new and bigger configuration.
In any event, it's rumored Apple will unveil a 27-inch iMac Pro in the Spring. In addition to possibly wielding a more powerful M1 processor, past leaks and rumors have also suggested it will debut with a mini LED display.