New operating systems always arrive with some interesting quirks, and when one gets released with as many restrictions as Windows 11, you know things are going to get interesting. Windows 11 was initially released with a laundry list of exclusionary requirements, presumably in the name of security. One of the most controversial items on the list may have been the TPM 2.0 requirement, with the strict requirement of an 8th Gen Intel CPU or a Ryzen 2000 Series (or newer) processor for AMD a close second.

While Microsoft may have relented somewhat on the TPM requirements and allowing first-gen Ryzen compatibility as well, both of those options come with the caveat that you're pretty much left without support. But what about the ancient Pentium 4 661 from 2006? Bring it on says the Windows 11 Compatibility tool.


Thanks to the video above by Twitter user @Carlos_SM1995 we actually get to see how this tool allows the single-core Pentium 4 661 to squeak past the iron-clad defense of the Windows 11 Compatibility app. Well, obviously it's not that iron-clad. In fact, if you want to know how to get around the defense, you'll find a guide here at HotHardware on how to install Windows 11 on unsupported hardware. But, what makes this quite interesting is the fact that Microsoft's own tool authorizes the CPU for use. Sure, it fails other checks along the way because the system doesn't support other requirements for Windows 11, but that that green checkmark is quite clear in the checker. 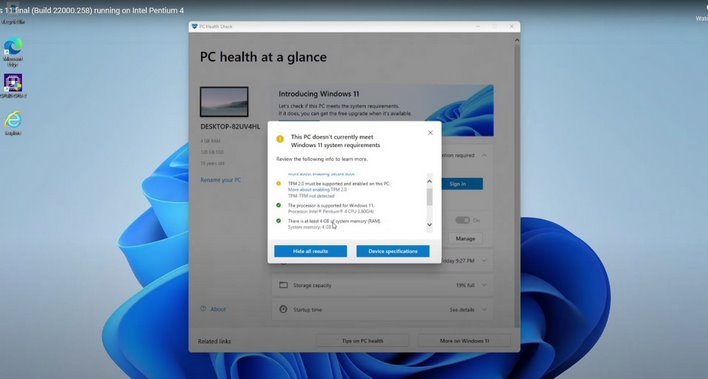 So what is going on here? Is the Pentium 4 really an approved Win11-compatible CPU? Not quite. According to this piece, it's actually kind of funny. In its effort to blacklist CPUs, it seems that Microsoft simply omitted the Netburst family of Intel Pentium processors from the list. Microsoft simply skipped the entire family, so in reality, this likely doesn't just apply to the Pentium 4 661, but to the entire family. Another interesting aside is that Windows 11 sees this single core with Hyper-Threading CPU as a dual-core, which it is not.

This is little more than an entertaining mix-up on Microsoft's part, but could still spur some interesting discussion. The video shows the operating system running quite acceptably on the Pentium 4, which may lead some to argue that this proves Microsoft's requirements are arbitrary and were chosen to force users to upgrade. Then again, Windows 11 is focusing on security, and requires hardware / features present only on more recent hardware. What do you think? Let us know in the comments below.