Closing Time, Microsoft's Support Party Is Over For Windows 7 And 8.1

Last call for alcohol! Just kidding, we're not really drinking on the job (honest!). However, the Windows 7 and Windows 8/8.1 support party has finally come to an end, with today marking the last day of each operating system's extended lifecycle. What that means in a nutshell is that, after today, Microsoft is no longer providing support for either OS.
For many users, that's actually been the case for quite some time now—Microsoft stopped dishing out security updates to Windows 7 three years ago (January 14, 2020), except for businesses that paid a fee for extended support. But now the third and final year of extended support has come to an end, meaning Microsoft is completely finished updating an OS it released more than 14 years ago.
Likewise, it's the end of the road for Windows 8.1 today as well. Microsoft previously gave users a heads up while urging them to upgrade their PCs to Windows 11, or to buy a new PC altogether.

"As a reminder, Windows 8.1 will reach end of support on January 10, 2023, at which point technical assistance and software updates will no longer be provided. If you have devices running Windows 8.1, we recommend upgrading them to a more current, in-service, and supported Windows release. If devices do not meet the technical requirements to run a more current release of Windows, we recommend that you replace the device with one that supports Windows 11," Microsoft stated in a support document. 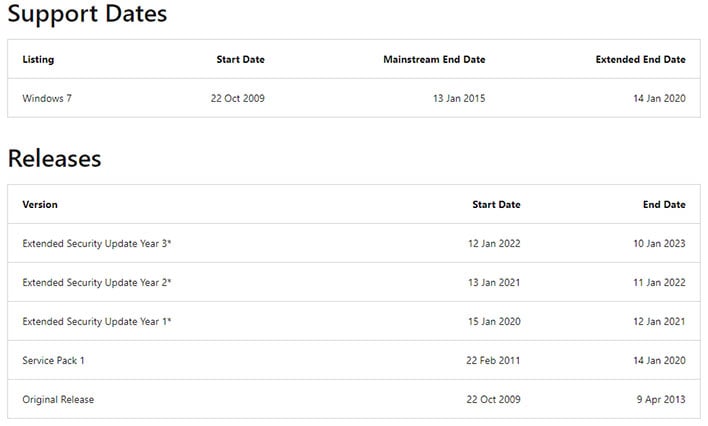 So what does this mean? Your Windows 7 or Windows 8/8.1 PC won't stop working after today—you'll still be able to boot up and use it like you have been, for those of you still running one those legacy OSes—but Microsoft will no longer push out software updates or security patches to those systems. It won't provide technical support, either.
The caveat is that Microsoft could make an exception from time to time, like it did when it patched Windows XP against the WannaCry ransomware outbreak. But that's a rare situation. For the most part, Windows 7 and Windows 8/8.1 PCs will be sitting ducks for any zero-day vulnerabilities that pop up in the coming weeks and months. Theoretically, attackers could be put an extra focus on exploiting Windows 7 and Windows 8/8.1 now that those OSes are no longer receiving security updates.
While many users have moved on to newer OSes, there are still millions of PCs running Windows 7 and Windows 8/8.1. According to StatCounter, those versions of Windows collectively account for around 14.5 percent of all Windows PCs.
It's not just Microsoft leaving those OSes behind. Barring a last-minute change, Google plans to sunset its Chrome browser for Windows 7 and Windows 8/8.1 on February 7, 2023, starting with version 110.