Does anyone remember the Xbox 360? That second-generation Xbox gaming console first launched way back in November 2005, and that was the last time that Microsoft released a first-party wireless headset for its gaming console. However, that changes today with the announcement of the Xbox Wireless Headset.

Given Microsoft's efforts to bridge the gap between differing gaming experiences, the Xbox Wireless Headset is supported among Xbox One and Xbox Series S/X consoles, Windows 10 PCs, and mobile devices like smartphones and tablets. So, you can be sure that Microsoft will be pushing this is a great accessory to have alongside an Xbox Game Pass Ultimate subscription.

In the time since the last Xbox-centric wireless headset was launched, Microsoft has released two generations of Surface Headphones to the public. As a result, you can see some of the design features of those premium wireless cans on the Xbox Wireless Headset. In addition to being lightweight, the Xbox Wireless Headset features large ear cups that are ensconced in a soft polyurethane leather for maximum comfort. There's also a thick and comfy cushion for the adjustable headband.

There are rotating dials on the outside edge of the ear cups to adjust controls like volume and game/chat balance. Microsoft said that it designed the headphones to mirror the design aesthetic of the Xbox Series X, so you'll find the same stealthy black finish and green accents. It's an understated design that we must say looks quite good.

The headphones connect wirelessly to a PC, Xbox console, or mobile device via Bluetooth, and Microsoft says that the Xbox Wireless Headset supports Windows Sonic, Dolby Atmos, and DTS Headphone: X technologies for immersive sound during your gaming sessions. Microsoft is promising best-in-class audio quality, and the dual beam-forming microphone with voice isolation technology should ensure that your voice is picked up accurately for when you're yelling at tweens in Fortnite. 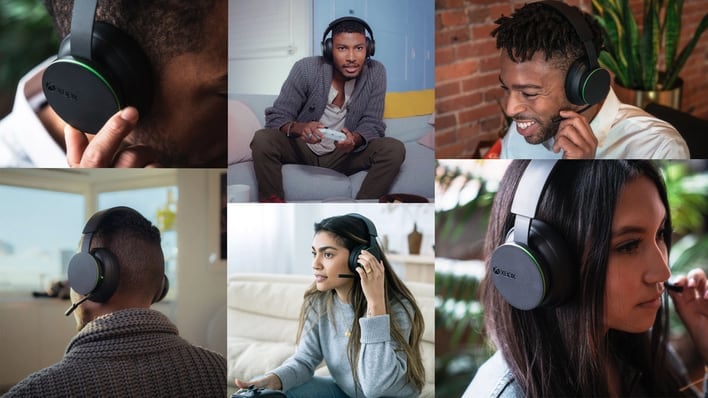 “We spent a lot of time in the audio testing chambers trying to characterize and understand how the headset reproduces audio in different room environments. It goes in your living room, game room, and dorm room and we want it to sound the best for all types of audio.” said Erik Garcia, Project Architect for the Xbox Wireless Headset. “In the same way, the team studied gameplay to ensure great sounding chat with a sensitive mic to prevent background noise.”

Microsoft says that the Xbox Wireless Headset will launch on March 16th priced at $99. You can preorder it right now from the Microsoft Store.