I was surprised to learn this when I looked it up, but the first Chromebook actually came out a decade ago (just over a decade, actually). During that time, Chromebooks have made a significant dent in the education market, and even outsold Macs for the very first time last year. Microsoft has seen enough and is hoping to claim schoolyard dominance with its new Surface Laptop SE, powered by an also-new version of Windows 11, called Windows 11 SE.
Microsoft has tried in the past to ship simplified versions of Windows, with varying success. This is its latest attempt, and perhaps its most ambitious one, with Windows 11 SE hitching its wagon to Microsoft's newest operating system. The question is, how exactly is it different? Microsoft has not given a complete answer, but we do know some things about the School Edition (technically, "SE" doesn't actually stand for anything, and is simply "intended to clearly differentiate it from other editions like Home and Pro," but we all know).

What Is Windows 11 SE And How Is It Different Than Windows 11? 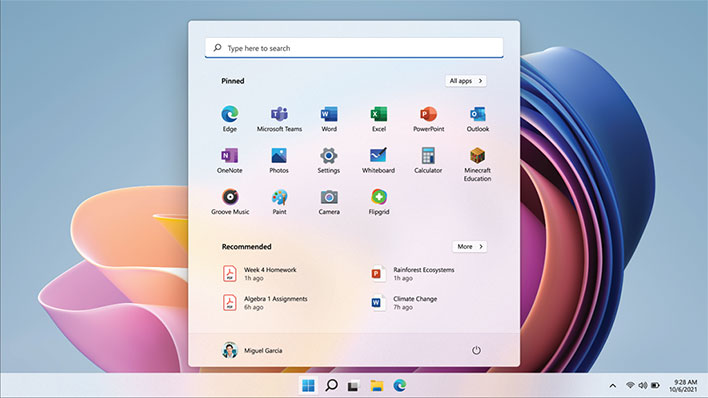 At a high level, Microsoft says "Windows 11 SE was built for teachers who need a simple, distraction-free environment for their students and for school IT admins who need devices that are secure, easy to deploy and manage, and perform well all day across the changing conditions of a school year."

There are some key differences between Windows 11 SE and Windows 11, though, the biggest one being that SE doesn't run all Windows applications. It doesn't have a Microsoft Store, though IT admins can inject Win32 and UWP apps if those choose. 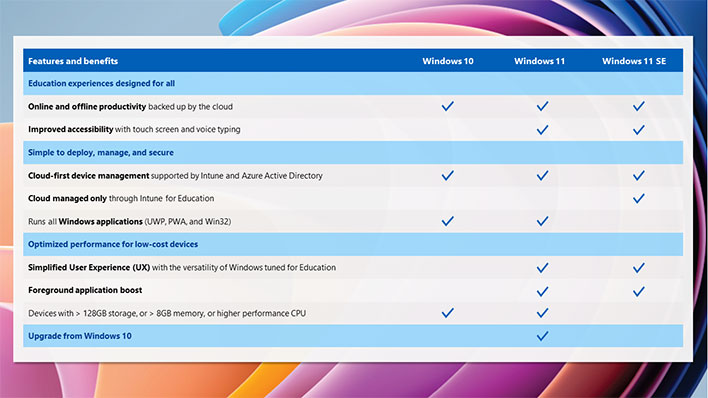 You can see a basic rundown of how Windows 11 SE compares, though not everything is included in the chart. For example, when loading apps (like Edge), they open up to a full screen experience, so students don't need to mess with resizing windows. Also, the app installation process is controlled, so students can't run wild installing their own programs like Fortnite.
Microsoft describes Windows 11 SE as a "cloud-first" OS. Out of the box, Windows 11 SE only runs apps that load in a browser (Edge or Chrome), which Microsoft says is "very common for education apps." Web apps don't require any installation. Students also have limited access to settings, as Microsoft says it heard from teachers that they want a "distraction-free environment."
There's a Windows 11 SE FAQ (PDF) that covers a lot more, but this is essentially a Windows-flavored twist to Chrome OS, with Microsoft pitching ease-of-use and affordability for the education market. 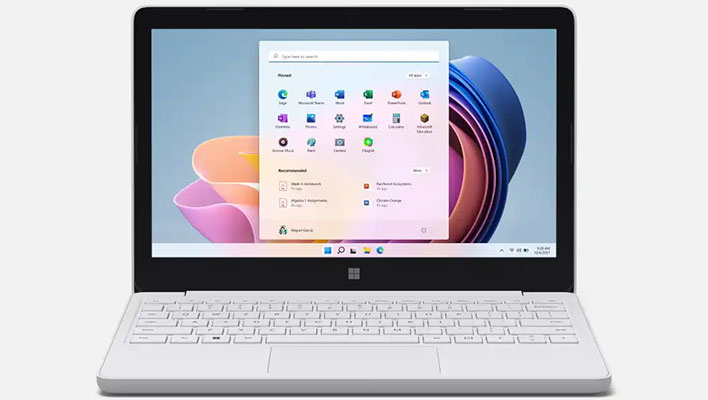 On the hardware side, Microsoft announced the Surface Laptop SE running Windows 11 SE, starting at $249.99. That qualifies it as Microsoft's cheapest Surface PC ever. Like Windows 11 SE, it is intended for the education market, and specifically for K-8 students.
It's almost like a modern day netbook, but still wedges into a different product category. It features an 11.6-inch TFT display with a 1366x768 resolution powered by an Intel Celeron N4020 or N4120 processor with integrated graphics (UHD 600), 4GB of 8GB of DDR4 RAM, and 64GB of 128GB of eMMC storage. So it's not a power house, but considering it runs a cloud-first OS, it doesn't need to be, either.
Other features include a TPM 2.0 chip, USB Type-A and Type-C ports (one each), a 3.5mm headphone/microphone combo jack, 1MP webcam, 2W stereo speakers, 802.11ac and Bluetooth 5.0 LE wireless connectivity, and a battery that is purportedly good for up to 16 hours of "typical usage."
It's basically a somewhat stripped version of the Surface Laptop Go, with an even more affordable price. That latter bit is key in competing with Chromebooks. Microsoft's also touting easy repairs as a key feature.
"Surface Laptop SE offers the same high-quality typing experience as the rest of the product portfolio but offers new levels of repairability for IT admins. That means vital components like the display, battery, keyboard—even the motherboard—can be easily repaired onsite, saving time and money for IT admins and schools," Microsoft says.
We're entering the second half of the school year and it will be interesting to see if the Surface Laptop SE with Windows 11 SE can make a meaningful dent in Chromebook's footprint.