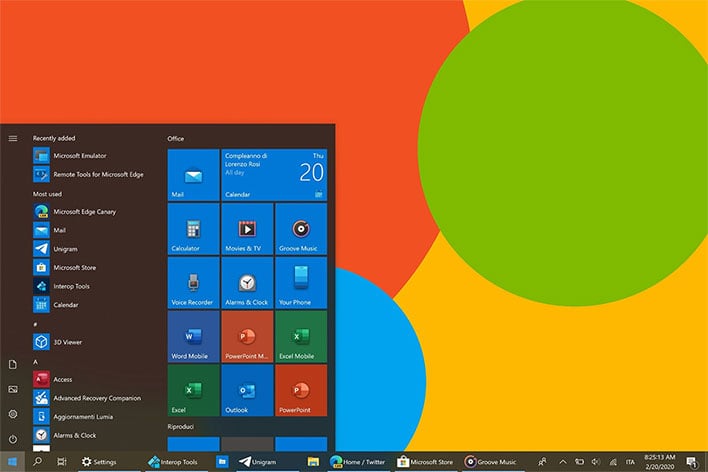 If you gave the Windows 10X emulator a spin, you may have noticed a more colorful experience with dressed up icons and other bits. Apparently the same visual changes are headed to the regular versions of Windows 10. Microsoft is at least testing things out, as the latest preview build in the Windows Insider program looks a bit different than previous builds.
This applies to users who are subscribed to the Fast ring. These builds come fast and furious, with Microsoft typically rolling out new preview builds every week, giving Fast ring users the earliest access to new features. The caveat is stability—Microsoft says to "be prepared for issues that might block key activities or might require workarounds." You can read more about the rings in Microsoft's Windows Insider Program User Guide.
As to the refreshed look that is currently being tested, Aggiornamenti Lumia posted some screenshots on Twitter...

Several programs have new icons. For now, the list includes...
In some cases, the changes in design are very subtle. For example, the mail icon is only slightly different in the latest Fast ring build. Have a look...

The image on the left shows the new Mail icon in the latest Windows 10 preview build in the Fast ring, and the image on the right shows the old/current version. In essence, it looks like Microsoft is not going to beat Windows 10 uses over the head with a brand new look when the next major feature upgrade arrives (Windows 10 20H1).
That said, these are not likely to be the only icons to get a refreshed look. Aggiornamenti Lumia had previously posted refreshed icons for Weather, File Explorer, Solitaire Collection, and a few others.
This all ties into Microsoft's Fluent Design language. It looks like Windows 10X will kick things off, with Windows 10 at large getting some modernized upgrades. In addition, you won't have to necessarily wait for the 20H1 update to get the new look. Some of the refreshed icons could arrive sooner, depending on when Microsoft updates the apps.