The older I get, the poorer my eyesight becomes (or at least that is the justification I use when shopping for a giant screen TV). However, if you are in the same boat, do not mistake blurriness in the Windows 10 taskbar for a degradation in your vision. While that is one possibility, the more likely one is a recent Windows 10 update.
What is at issue here is an apparent bug in the 'news and interests' widget that Microsoft has begun pushing out to Windows 10 PCs. By default, this shows the weather in your particular region, and if you hover the mouse cursor over the widget (or click or tap it), it brings up news headlines, stock quotes, sports scores, traffic information, and other stuff (which you can personalize).

That is all fine and dandy, but it is blurry compared to the rest of the taskbar. Here is what it looks like on my PC right now... 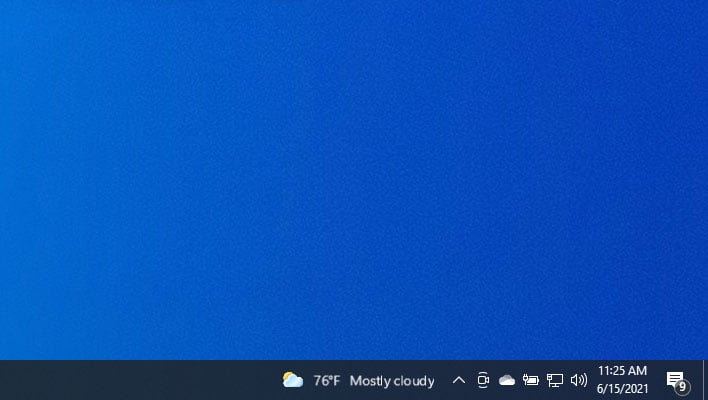 Notice that the temperature, cloud coverage designation, and weather icon are all noticeably out-of-focus, compared to the rest of the taskbar, especially when compared to the text showing the time and date. Users have uploaded photos to social media that show the same thing, some of which are more noticeable than others.
The issue is on Microsoft's end, as the company has acknowledged that the news and interests button might have blurry text on some PCs.
"After installing KB5001391 or later updates, the news and interests button in the Windows taskbar might have blurry text on certain display configurations.," Microsoft states as a known issue. "We are working on a resolution and will provide an update in an upcoming release."

How To Disable Windows 10's News And Interests Taskbar Widget 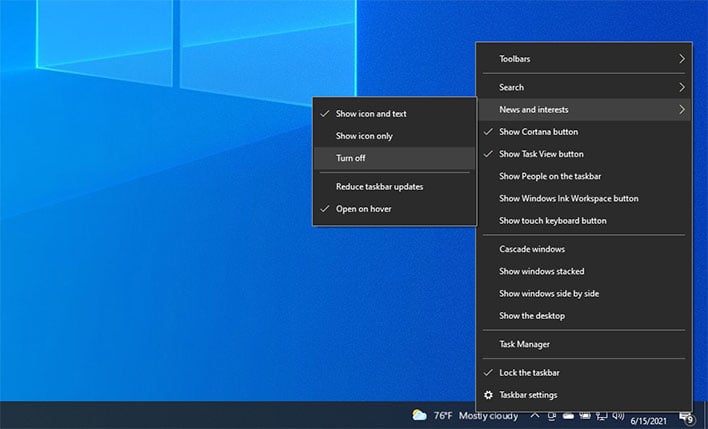 This affects recent versions of Windows 10, including 21H1, 20H2, 2004, and 1909. While the bug has not been stomped out yet, there is a workaround of sorts—you can disable the news and interests widget. To do that, follow these steps...
Alternatively, you can select show icon only, which still on the blurry side, but a bit less noticeable than the text portion (at least to my eyeballs, anyway). You can always turn it back on later by following the same steps.