Have you been experiencing gaming issues since the release of the latest Windows 10 update? You are not alone. The problems associated with the last Windows 10 update are being investigated by NVIDIA and others, and so far the suggestion is to just roll back the update.

NVIDIA staff member “Manuel” stated in a forum post, “If you are seeing lower performance in games, check if rolling back Windows 10 Update KB5000842/KB5001330 solves the issue.” This solution has been previously tested by several Reddit users as well and, many confirmed that rolling back the update did seem to resolve the issues.

Users have experienced a wide range of performance issues since they installed the most recent Windows 10 cumulative update. Several of the issues appear focused on gaming. Users have reported FPS drops, VSync issues and stuttering. There have also been a slew of other rather strange problems. Some temporary users have been unable to access files like documents and pictures. Others have noted that their computer has been more prone to crashes. 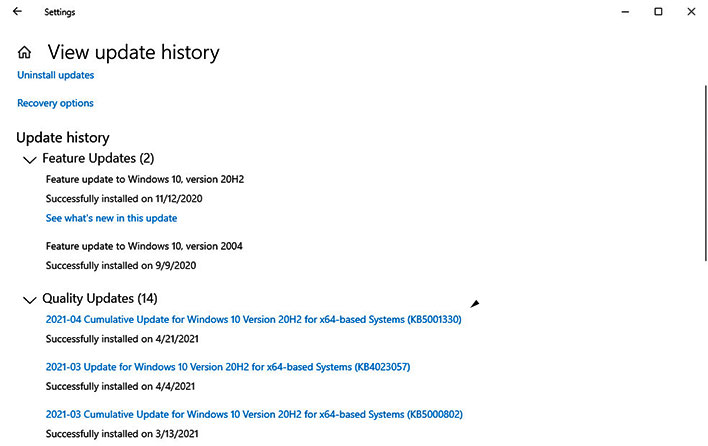 Some of these problems also existed with the optional March Windows 10 Update KB5000842. For example, there have been error messages when a user’s device is connected to a Windows Mixed Reality headset. They were supposed to have been resolved with the April update, but the update has been unsuccessful thus far.

Microsoft has not yet provided their own solution, despite the fact that the list of issues connected with update only seems to grow longer each day. It is also important to note that systems with NVIDIA hardware are not the only devices impacted by the update. AMD users have also reported many of the same issues as well. However, it appears that, for now at least, uninstalling the latest update may be the best way to resolve these irritating issues.

This is unfortunately not a great solution as updates also contain essential security fixes. You may therefore be able to get rid of the performance degradation that has been haunting you by uninstalling the update, but your device may be left vulnerable to some of the most recent security patches. We therefore recommend using caution before completely uninstalling the update. Microsoft hopefully will provide more information and hopefully a resolution with new a patch soon.

Update, 4/25/21 - Microsoft has issued a statement, patch and official mitigation advice on this issue.