If you use Microsoft Teams and Outlook at work, you may have noticed that bringing files between the two platforms was a pain. Seemingly, 11,571 other people agreed when they upvoted a suggestion on the Microsoft Teams forum from 2016 that asked for the ability to drag and drop files between Outlook and Teams. Now, that feature has finally been implemented, according to an engineer for Microsoft Teams. Office workers rejoice!

Before this update rolled out, Microsoft Outlook users who received files by email would have needed to drag them to their desktop before dragging the file to Teams. Given that Teams and Outlook are cut from the same cloth, it would have made sense to have this functionality in the first place. In any case, it is available now, which is great for streamlining work between the two platforms. 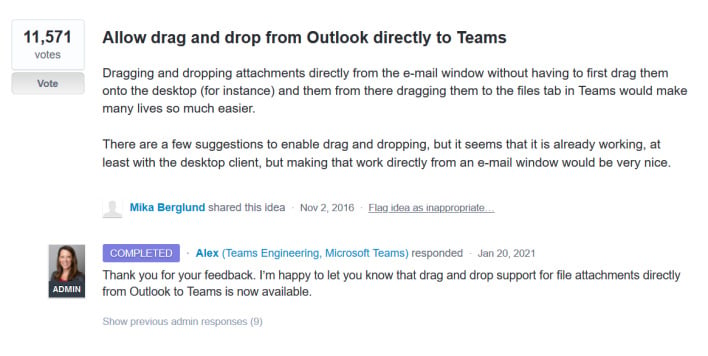 Besides the handy drag and drop functionality, Microsoft is also working on several other useful tools and modifications for Microsoft Teams. Arriving sometime this month, Teams will be getting a multi-window chat function that will allow users to pop out individual chat windows. Earlier this month, we also reported a Dynamic View feature in the works right now and should come out sometime in March.

Overall, Microsoft is improving the user experience of Teams using feedback and other modern features from other platforms. Slowly but surely, Microsoft Teams will start to compete with Slack and Discord for work, which is quite nice. In any case, keep an eye on HotHardware for the latest on Microsoft Teams as development continues in 2021.