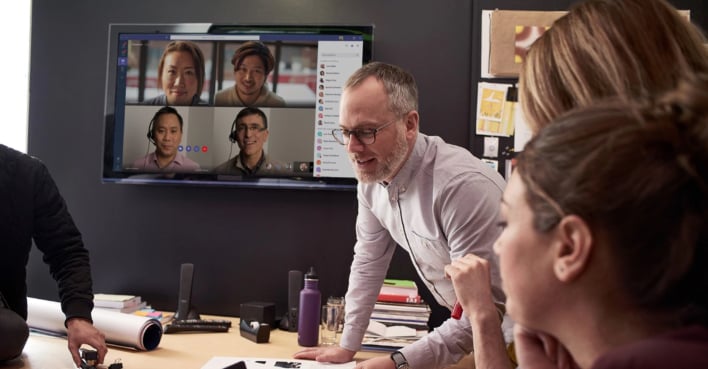 Picture yourself in a virtual meeting, and someone is going over Q4 company stats in PowerPoint with spinning transitions and buzzwords like “synergy” and “paradigms.” Though you were already bored, it does not help that the presenter or presentation looks small on the screen, so you cannot even attempt to focus even if you wanted to. While the presenter rambles on about “synergistically conceptualizing bleeding-edge e-service paradigms” in the next quarter, Microsoft wants to help you try to focus on the meeting. In March, Microsoft Teams is getting a Dynamic View feature that will do automatic optimizations or let users personalize their view in Teams.

Remco de Kramer, Product Marketing Manager for Modern Work at Microsoft, posted on LinkedIn about Microsoft Teams' future. Rather than have the presenter or presentation appear small, Dynamic View will show “content & video side-by-side” while allowing automatic or manual adjustments to the gallery. He posted a brief trailer about the feature coming in March below.

Before this feature rolls out, Microsoft Teams will also be getting “custom layouts for meetings” in February. The Microsoft 365 Roadmap says the following about the feature:

Presenters will be able to customize how content shows up for meeting participants, including overlaying their video on content or moving their content box to a corner of the video view - allowing for a more dynamic content viewing experience where presenters can easily direct their audiences' attention through hand gestures and facial cues, without making the viewer choose between the speaker and the content.

As we are amidst the COVID-19 pandemic, virtual meetings have become more prevalent than ever, and it is imperative to have a seamless experience. Microsoft Teams is taking a step toward making meetings a little bit better overall, which is nice to see. After all, those synergistic paradigms will not make themselves...