Typically, pouring liquid all over computer components is not the greatest of ideas considering the whole electricity thing. However, Microsoft employees are doing just that to cool down servers in its data centers. This two-phased immersion cooling system is rather impressive and could be the future of data centers everywhere.

As computer hardware improves, air cooling is no longer the most efficient or best option for the data center. This is where Microsoft turns to liquid cooling with an interesting twist. While pouring water on computer hardware may be bad, Microsoft uses a specially engineered fluid from 3M, which is harmless to electronics and is "engineered to boil at 122 degrees Fahrenheit, 90 degrees lower than the boiling point of water." This temperature, which is approximately 50C, allows the CPU's heat to be transferred into the fluid, thus cooling the system. 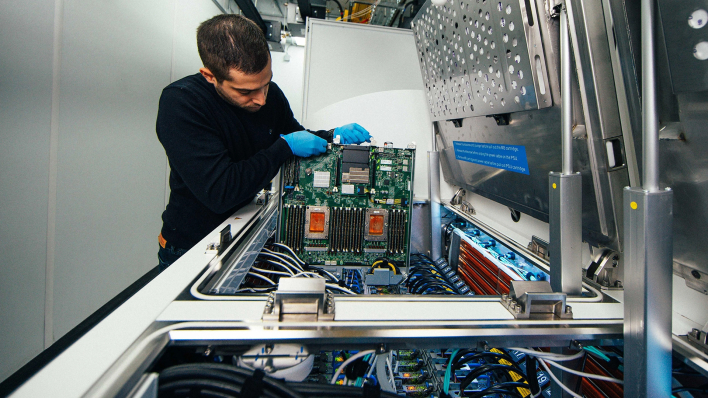 Inside the couch-shaped tank is a cooled condenser that comes in contact with the gas from the boiling liquid. The gas then cools down, condenses, and falls back into the server vat to continue cooling things down, making this a closed-loop cooling system. Marcus Fontoura, CVP at Microsoft and Chief Architect of Azure compute, explained that this cooling system "will have not only a huge impact on efficiency, but also a huge impact on sustainability because you make sure that there is not wastage, that every piece of IT equipment that we deploy will be well utilized," due to heat limitations being lifted.

While this immersed cooling technology is quite fascinating, it is not new nor the only thing that Microsoft is working on. This is part of a multi-pronged approach to reducing emissions and making the data center better overall, such as Project Natick, an underwater data center. Hopefully soon, we will see more of what Microsoft has created, so keep an eye on HotHardware for updates.