A recent job listing shows Microsoft is on the hunt for a Director of SoC Architecture, a full-time position within its Surface division. The job listing outlines the necessary qualifications to be considered for the role and some of the responsibilities, but the potentially most interesting aspect is what it doesn't outright say—that perhaps Microsoft wants to design its own silicon, just like Apple is now doing. Maybe.

This is not a foregone conclusion by any stretch. Barring an official announcement of anything, we're left to read the tea leaves the best we can. So we mention this only as a possibility. One of many, actually, albeit the one that piques our interest the most because of the possible ramifications.
Designing silicon in-house would be a major move for Microsoft. Apple has done exceptionally well for itself by applying the same strategy to its mobile devices, namely its iPhone and iPad lineups. And more recently, it made the decision to do the same across its entire product line, pushing Intel out the door on its various Mac systems.
It's a bold strategy for sure, though one that has certain advantages. By designing hardware in-house, companies like Apple that employ that strategy can fine-tune the silicon to their specific needs and goals. It can also be more lucrative.

Will Microsoft actually go that route on its Surface hardware, though? Let's look at the job listing... 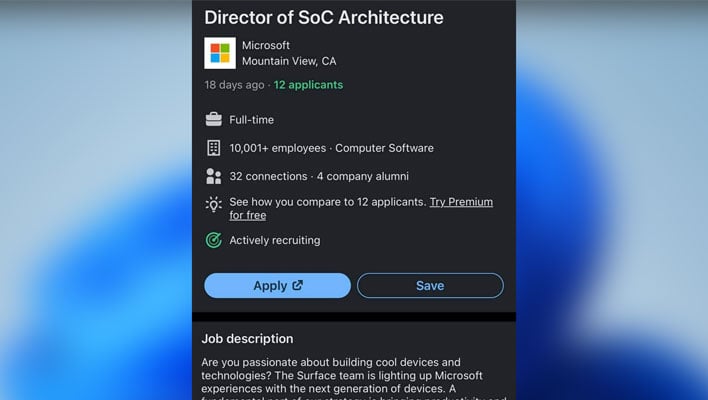 "Are you passionate about building cool devices and technologies? The Surface team is lighting up Microsoft experiences with the next generation of devices. A fundamental part of our strategy is bringing productivity and mobility together through devices that enable new experiences – helping people and organizations unlock their creativity, passion, and potential," the listing states.
It also mentions that the Silicon Architecture division as a whole is responsible for defining features and capabilities of SoCs that get injected into Surface devices. And it makes clear that Microsoft is currently building the next-generation of Surface devices, which is not shocking news—there's no room for stagnation in the ever-changing technology landscape.

On the flip side, this could merely be a hire for someone to manage the design for semi-custom engagement with AMD, and not necessarily about Microsoft wanting to blueprint its own chips. Microsoft does already have a semi-custom business engagement, after all. It's just interesting that this is specifically about the Surface division.

So anyway, from a high-level overview, this amounts to either a major movie in the making, or much ado about little. What's you're opinion on the matter? Sound off in the comments below!