There was a time when a surefire way to get us to roll our eyeballs all the way to the back of our heads was for Microsoft to tout the sheer performance of its Internet Explorer browser, and then later its Edge browser. Not anymore. Microsoft's retooled Edge browser is the real deal. it's also a work in progress, with Microsoft testing a new Performance mode on a pre-release build.
As it does with Windows 10, Microsoft maintains Insider channels for its Edge browser, including Beta (the most stable of the test builds, with major updates rolling out every six weeks), Dev (updated on a weekly basis with new features and improvements), and Canary (nightly releases infused with the latest things Microsoft has been working on).
The new Performance mode was added to the Canary channel starting with build 91.0.856.0. What exactly does it aim to do, though? 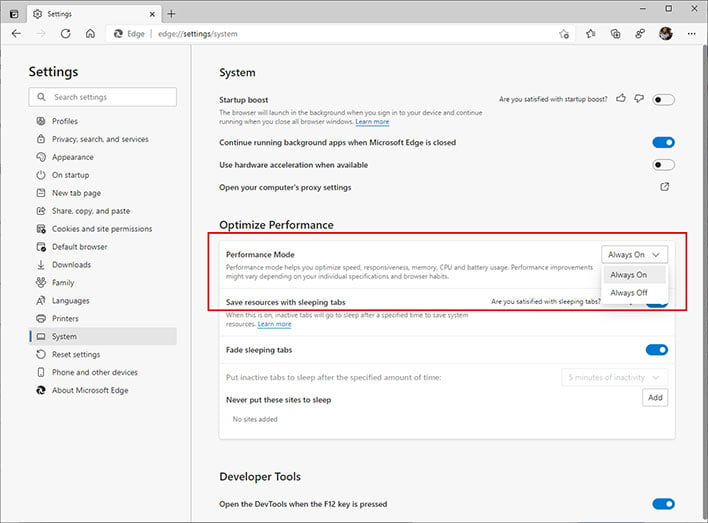 "Performance mode helps you optimize speed, responsiveness, memory, CPU and battery usage. Performance improvements might vary depending on your individual specifications and browser habits," the description reads.
It's not clear what the trade offs might be for enabling Performance mode, if there are any. It seems like there might be, otherwise it would make more sense to bake performance improvements into the default operation of Edge, rather than have it be something users can toggle on and off within the Settings menu, as currently implemented.
Whatever the case, it's nice to see Microsoft putting development efforts into improving performance of an already fast browser. Edge is on an accelerated four-week release schedule, just like Chrome, and is the second most popular browser on the planet, with a 7.75 percent share of the browser market, according to the latest Net Marketshare data.
If you want to try out the new Performance mode, head to the Edge download page and grab the Canary build. This will not affect your main installation of Edge—the two can co-exist on your PC. Once installed, head over to Settings > Systems and flip the toggle under the Optimize Performance section.
You may not see the option, as according to Microsoft community member and "honored contributor" Violet Hansen (@HotCakeX), this is a controlled feature roll-out. You can force it to be visible, however, by editing the launch parameters. To do that, right-click on the Edge Canary shortcut on your desktop and select Properties. In the Target field, add a space after the existing text, then copy/paste this string...

Click the Apply button, then fire up Edge Canary, using the shortcut. The option won't show up if you are loading Edge Canary from the existing shortcut on the Taskbar—you'll need to delete it and create a new one with the modified shortcut on your desktop.