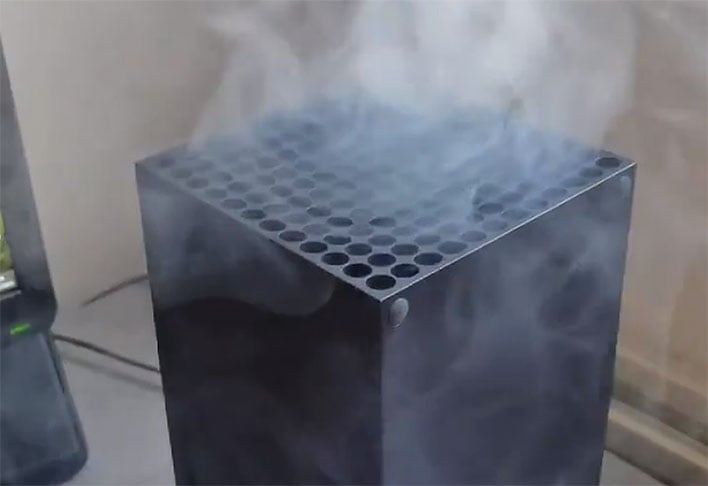 A handful of viral videos might have you believing that some early Xbox Series X adopters caught on video their shiny new consoles going up in smoke, an apparent result of overheating. Indeed, that would be a major fire hazard, if true. But it's not true. Instead, some dingbats figured out they could blow vape smoke into their console and have it exhaust through the top, which prompted Microsoft to put out a statement saying that is not a good idea.

"We can't believe we have to say this, but please do not blow vape smoke into your Xbox Series X," Microsoft stated on Twitter.
Microsoft is keeping a good sense of humor about the situation, posting several follow-up tweets, one of which reads, "The only heat coming from us is our tweets," and "2020 amirite." 2020 indeed, Microsoft—what a wacky year it has been.
The company also posted an explainer on its Xbox Studio account, showing exactly how people are faking the cloud of smoke pluming from their new consoles. Have a watch...

"For the English people: I want to show you, how, with a Vapor and turning off the console, you can make a situation that looks like the console is 'On Fire'," Microsoft stated in a follow-up post.
It's nice to see Microsoft comment on the situation. Not that it had much choice—the alternative was to stay mum on the viral videos, and risk people thinking its consoles are actually going in smoke as a result of overheating, which could prompt people to choose the PlayStation 5 over the Xbox Series X. The next-gen console wars have officially begun, after all. Additionally, others may be tempted to replicate the effect, perhaps not thinking about the effect vapor residue could have on the internal components.

While the console is not actually bursting into flames, owners have found other amusing ways to go viral, like placing a ping pong ball on top of the vent. Take a look...

The air being expelled is strong enough to propel the ping pong in the air a few inches, giving it a levitating effect. As for noise, the user who posted the above video says it is "dead silent," noting that "both new consoles are super cool and quiet."